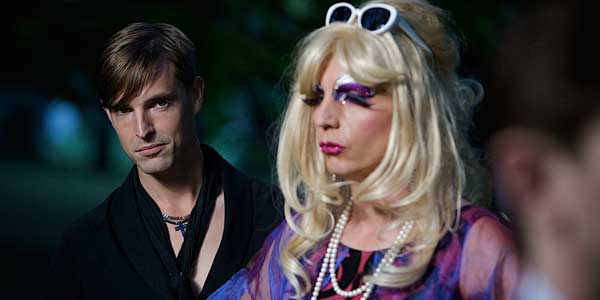 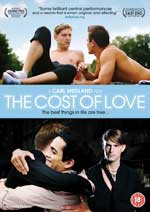 Dale works as a male escort in Greenwich, London, specialising in fulfilling people’s sexual fantasies, whether it’s to have him role play as a schoolboy or to look after a client like they’re a baby. However, away from his work he’s starting to weigh up his life. He’s approaching 30 and while he enjoys the freedom his lack of commitments allow, his real desires begin to leak out when his straight best friend, Raj – who Dale has been in love with for years – announces he’s going to get married. In amongst all this is Dale’s friend Sean, a flamboyant drag artiste, while up on the local heath there’s been a string of brutal gay hate crimes.

If you watch a lot of gay movies you quickly come to realise that not that many are 100% successful. However while many of these films fail because they don’t really try all that hard (seemingly hoping that including some gay stuff is all that’s needed), The Cost Of Love is in the much preferable category of a movie that shoots for the moon but falls slightly short.

Writer/director Carl Medland’s script is an ambitious attempt to cover a lot of ground and create a complex portrait of modern sexuality and life. However it has a frustrating tendency to dip into unnecessary melodrama, which threatens to undermine a lot of the sterling effort elsewhere. And while the use of an unreliable narrator can be a very effective device, here the handling of it is uncertain, which makes the ending in particular seem more tricksy than a smart conclusion (which it very, very nearly is).

However I don’t want to sound too harsh as much of the script and direction is very effective, offering a surprisingly deep and complex look into the main character. In some respects Dale is a pretty unpleasant person (to the point where I was slightly wondering why his comparatively nice friends have anything to do with him), but you’re drawn into his world through great characterisation and a very good central performance from Christopher Kelham.

Indeed the acting is generally of a higher calibre than most low-budget gay cinema can muster, with Michael Joyce – who tragically died in a car accident shortly after filming – deserving special mention as the flamboyant Sean, whose own demons are in some respects more interesting that Dale’s (as are the ways he deals with them).

The Cost Of Love may be a slightly flawed movie, but it does more than enough to make it a worthwhile watch, especially as it’s likely to stick with you after the credits role. It’ll certainly be interesting to see what Medland comes up with next.

Overall Verdict: An ambitious movie that could have done with some judicious script editing, but nevertheless creates a compelling portrait of modern gay life.