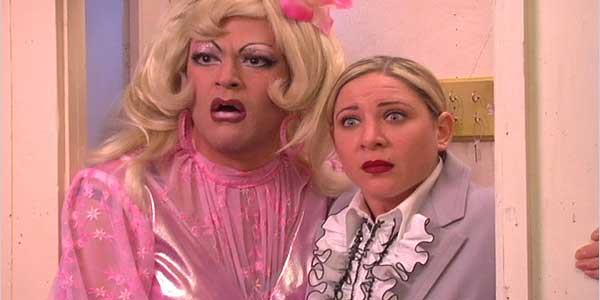 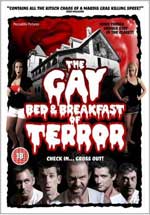 On the eve of a major LGBT blowout, five gay and lesbian couples book into the Sahara Salvation Inn. However, rather that being the gay hotel it purports to be, it’s actually run by a psychotic family, led by a harridan mother who hates all homosexuals and will kill any gay men who refuse marry her nymphomaniac lesbian daughter. She also has a Republican mutant son, who seems to be more of a feral creature than a person, and likes to eat homosexuals. As a result all the hotel guests are fighting for their lives before the night is out.

The Gay Bed And Breakfast Of Terror is supposed to be a camp, comedy horror and the plot synopsis does suggest it could be fun, but unfortunately it’s gory but not that horrific, isn’t funny, and it’s not even as camp as it seems to think it is. This really isn’t a good movie, as it seems more interested in ticking the boxes of gay cinema (a bit of sex, a little nudity, a man in drag) than actually being a good movie in its own right.

The gay characters are all stereotypes, and would be interchangeable if it weren’t for the token designation of leather daddy or lipstick lesbian, the pace is sluggish and every time is tries to be funny, it falls flat on its ass. There have been a couple of decent gay horror movies – Hellbent in particular springs to mind – but this certainly won’t be joining the ranks. It’s a shame really, as the film has a few good ideas, but the filmmaking and script is so lackadaisical that the film never becomes anything more than tedious.

The disc includes a commentary, featurette, a music video, some outtakes and a few other bits and pieces, however as the film is so atrocious, it’s unlikely you’ll be wanting to keep the disc in your player after the movie ends.

Overall Verdict: I think it’s time for gay people to stand up and demand better movies, because Gay Bed & Breakfast Of Terror is just the latest example of how rubbish many gay films are.