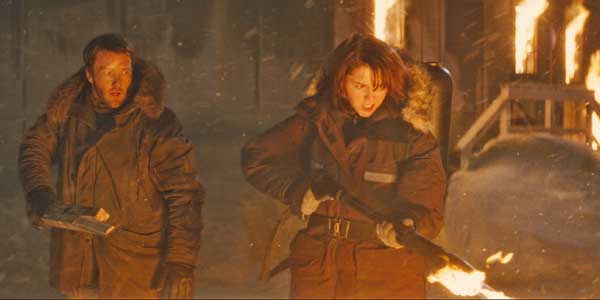 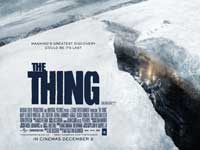 What we have here though isn’t a straight remake, but (as the movie studio insists on calling it) a ‘prelude’ to the Kurt Russell movie. Quite why they gave it the exact same name as the other film is a bit of a mystery then, but it just goes to show some of the muddle-headed business-butting-up-against-entertainment thinking that went into the new The Thing.

Universal apparently originally wanted a remake, but the producers managed to convince them a prequel would make more sense, so that they weren’t tampering with something great. You get the impression though that most of the film was the result of compromises and arguments between the wants of the studio and the makers, with the result we get something that’s unlikely to please either.

If you remember the 1982, that followed a team of American researchers in the Antarctic who discover the destroyed base of a Norwegian team, who seem to have all been killed by something terrible. Shortly afterward, Kurt Russell and co. come under attack from a shape-shifting creature that is presumably what killed the Scandinavians.

This The Thing fills us in on exactly what happened to the Norwegian base, which turns out to be pretty much what happened to Kurt Russell, but not as entertainingly. Rather than having a Kurt Russell clone, the film tries to have an Ellen Ripley clone instead, in the form of Mary Elizabeth Winstead’s Kate Lloyd. Kate is an American palaeontologist brought in along with her colleague Adam (Eric Christian Olsen) to help investigate a structure that a group of Norwegian scientists have discovered in the Antarctic ice.

It must have been there for tens of thousands of years, and appears to be an alien spacecraft. After finding an organism inside the ship, it’s removed and despite Kate’s protestations about possible contamination, a sample is taken.

Unsurprisingly, this turns out to be a bad idea.

Soon ‘the thing’ has broken free from the ice, and while the Norwegians and Americans initially think they’ve managed to kill it, it soon becomes apparent it has the ability to replicate any organism and that nobody is safe. From then on it’s only a matter of time before everyone is getting picked off one by one.

While it’s not atrocious, it feels as if The Thing wanted to follow the template of Carpenter’s movie, but mistook what it is about that movie that made it such a lasting success. Undoubtedly, the special effects in the 1982 movie were incredibly impressive, and quite a few reviews of this new version have talked about this The Thing letting things down on that score. The argument seems to be that using CGI is intrinsically inferior. However I would say that actually the effects here are very good and surprisingly in keeping with the original, even if they lack the charm of physical SFX.

The problem with them is that they’re overused and lack the impact of the earlier movie because of the problems in the rest of the film. Carpenter’s movie was a masterclass in creating suspense. It brilliantly set up a world of unease, where nobody can trust anyone else and yet they have to if there’s going to be any chance of escape. The effects then come in to increase the sense of disquiet with their creepy weirdness, but only because you’re already pulled into the movie.

The new Thing meanwhile doesn’t really succeed in making you care about the characters or their predicament, with the effects being used as an attempted coup de grace that is supposed to paper over the fact there’s so little going on elsewhere. It doesn’t really work, although everyone puts a lot of effort into trying to get it to. Mary Elizabeth Winstead is good, even if she doesn’t seem 100% certain what she’s doing there. Likewise, the usually dependable Eric Christian Olsen, Joel Edgerton and Adewale Akkinuoye-Agbaje put their all in, but there’s not much more for them to do than get from A-to-B and wait to see if it’s their turn to die.

That said, it’s far from the worst horror movie out there, and if all you’re looking for is a trip from one OTT gory death to the next, with some okay special effects and nothing much going on in between, then you’ll probably be happy with the movie (especially if you’ve never seen Carpenter’s movie). However if you demand a bit more from your movies, like a decent plot, character and a real sense of suspense, you should look elsewhere.

It ends up almost being like fan fiction, which pays ridiculously close attention to the surface of what’s it trying to do, without realising what really make it tick.

Overall Verdict: Not terrible, but despite being related to a horror great, it’s a relatively low-rent gore-fest, that makes it successfully from one effect filled death to the next, but offer little more.