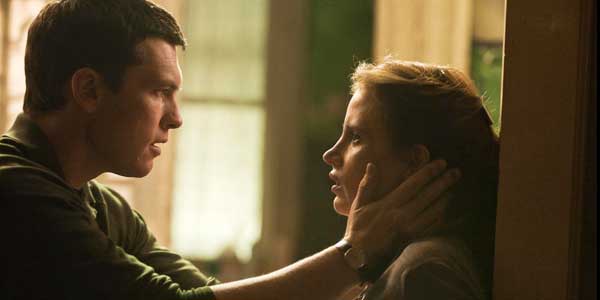 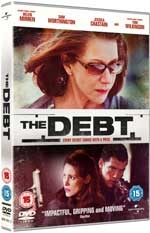 The Debt starts out in 1997, with Rachel (Helen Mirren) being lauded for her role in a Mossad mission 30 years before, in which she and two other agents are known for going into East Berlin to bring a Nazi War Criminal to justice, killing him in the process. After a dinner in her honour, shocking news comes through that one of the other agents, David (Ciaran Hinds), has thrown himself in front of a truck, and it seems to have something to do with their shared past.

Flashing back to 1965 – when Helen Mirren was Jessica Chastain, Ciaran Hinds was Sam Worthington and Tom Wilkinson was Martin Csokas – we find out exactly what happened on the mission. Rachel enters East Berlin and a rundown apartment where David and Stephan have been cooped up together for months, with only each other for company. When the mission goes wrong and the plan to get the Nazi out of East Berlin fails, the situation gets ever more intense while the trio try to find a way to extract the criminal to Israel.

Based on the much-praised Israeli movie Ha-Hov, written by Matthew Vaughn and Jane Goldman (Kick-Ass, X-Men First Class), directed by Oscar-winner John Madden (Shakespeare In Love, Mrs Brown) and with a cast to die for, The Debt has a lot going for it. It was actually filmed before either Sam Worthington or Jessica Chastain hit it big, but Madden was certainly good at spotting talent as they’re very good.

However, while the casts for both the 1990s and 1960s segments are very good, the film never quite manages to integrate the two. The movie is almost like an extremely good short movie and a decent one that never feel like they’ve been fully brought together to make a satisfactory whole. Although it doesn’t completely ruin the movie, it does hamper things, meaning the tension from one era doesn’t transfer over to the other.

The film is best when it’s in East Berlin, with Jessica Chastain’s very young agent thrust into a dark world. What starts out as a very businesslike attempt to bring a criminal to justice soon becomes about three damaged people and the difficulties that arise from putting them all together in a pressure cooker environment. When the mission doesn’t go to plan, the issue of the importance of truth raises its heads and then haunts them for the next 30 years.

This aspect of the film is fairly interesting – how important is knowing what really happened, if what people think happened makes them happy – but it works more intellectually than emotionally. Despite having Mirren and Wilkinson on top form, the movie is only really gripping when Sam Worthington, Martin Csokas and Jessica Chastain are trapped together trying to deal with an impossible and dangerous situation.

Sometimes very violent and uncompromising, The Debt is as much character study as a thriller. It’s never dull but pacing issues and the inability to integrate the two sides of the story mean it never quite reaches the heights it should. It looks good though and is never dull. It’s just a shame that it’s not completely satisfying.

The DVD also includes a few featurettes and an audio commentary, although nothing all that revelatory. The Helen Mirren interview isn’t bad though.

Overall Verdict: Gripping during its 1960s segments but rather looser when it gets to the 1990s, The Debt ends up less than the sum of its parts due to difficulty bringing the two eras together.

Special Features:  A Look Inside The Debt,  Every Secret Has A Price: Helen Mirren In The Debt,  The Berlin Affair: The Triangle At The Centre Of The Debt,  Audio Commentary with Director John Madden and Producer Kris Thykier