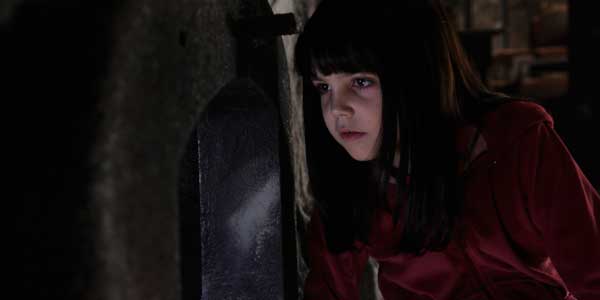 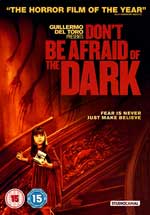 While in the original it’s a grown women who has problems when she moves into a new house, in the new version it’s a little girl called Sally (Bailee Madison), who comes to live with her father (Guy Pearce) and his girlfriend (Katie Holmes) in a massive old house they’re renovating. Sally feels rather unwanted and initially takes a disliking to her dad’s girlfriend, Kim, however that takes a backseat when she starts to hear whispering coming through the heating ducts and then strange little creatures escape from a boarded up basement.

Those around Sally initially think her mini-monster problems are in her head and the result of severe (and understandable) abandonment issues, but the creatures are real and very dangerous.

Don’t Be Afraid Of The Dark is a good lesson in how a potentially good film can be undermined by its own silliness. The film is full of tense scenes, nice touches and good shocks, but it never manages to sell the creatures. When they’re slinking around in the shadows it’s fine, and indeed the fact they’re allergic to light adds to the tension, but as soon as they emerge it’s tough to buy them as an evil scourge. The script adds in a load of fairy tale lore about them, taking in everything from the tooth fairy to ancient pacts with the Pope, but these just make the whole thing seem even dafter than it would be anyway.

Just as with real childhood nightmares, what’s terrifying in the dark when you can’t really see it loses its power when you see it properly. A small monster in the shadows could do anything, but once you see what they are they simply don’t seem very scary and the legends demystify them to the point the tension melts away. Demons are scary, but what look like deformed marmosets aren’t.

It’s a real shame as young Bailee Madison does a great job as a child in peril, Katie Holmes and Guy Pearce are fine as the adults who eventually come to realise the house has an unusual pest problem, and director Troy Nixey does a nice job building a creepy atmosphere. It’s just an inability to keep the mini bad guys from seeming dumb that does the film in.

On the special features front there’s only a trio of short featurettes looking at different aspects of the movie. They’re actually fairly interesting, and hint that despite Guillermo Del Toro being a brilliant filmmaker, he was perhaps a little too close to this one and needed to step back and give it an adult eye, rather than concentrating on what scared him as a child. In one respect he’s right, Don’t Be Afraid Of The Dark probably would scare the bejesus out of kids, but the fact is that with a 15 certificate it was made for adults, and it undermines their nightmares by being just a tad too daft. The little villains start off terrifying but it ends up seeming like a few mousetraps would have sorted everything out.

Overall Verdict: Some great scenes and a tense atmosphere ensure the film starts out great before revealing the villainous creatures causes any lingering fear to evaporate.