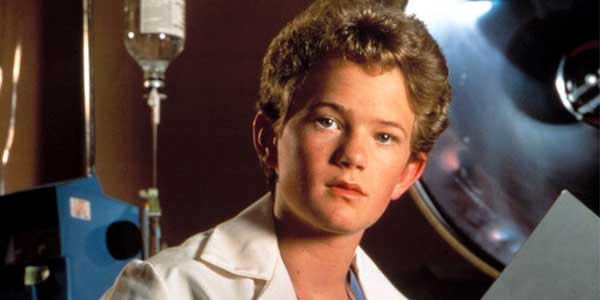 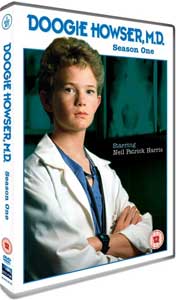 1989 was a more innocent time. It was a time when you could put a programme on TV about a 16-year-old doctor and rather than people going, ‘Hang on, this is a bit stupid’, it’d become a hit.

A very young Neil Patrick Harris plays the titular teen doctor, a genius who managed to get his doctorate at the age of 14 and now works as a 16-year-old surgeon in a hospital. Other than getting a few comments, nobody seems that bothered about being treated by somebody who should be at home popping pimples. That’s probably a good thing, as in nearly every half-hour episode he meets a patient whose problems oddly mirror what’s going on in Doogie’s personal life. In fact the constant parallels between hospital and home, as well as the fact every week he has a weighty but obvious issue to deal with, mean that if the young doc really was a genius, he’d pretty quickly realise he was living in a TV show rather than anything even approximating the real world.

As well as having patients to deal with, Doogie’s still got the usual teen problems, such as girlfriend Wanda, a walking hormone for a best friend called Vinnie and various other issues. However, as mentioned, this was a more innocent, pre-Dawson’s Creek time, where teens might think about having sex, but will always decide it’s better to wait, and if you shirk your responsibilities you’ll inevitably get your comeuppance. Every issue needs a moral at the end, in this case handily written by Doogie on a Stone Age computer (which to be fair, in 1989 probably made the programme look space age and futuristic).

There is no doubt that looking at it now, Doogie Howser is far from sophisticated entertainment. In fact it’s simplistic almost to the point of insulting the intelligence of the audience, but do you know what? I like it.

When I first put the disc in the DVD player, I initially intended to watch a couple episodes just to get the flavour of a show I hadn’t seen for decades. Several hours later I’d watched 14 straight episodes and had a very pleasant time. While it’s simplistic and silly, it’s easy to watch and charming. It’s also nice to see a show where the teenagers actually look like teenagers.

There’s little doubt that the box set’s main draw is as a nostalgia trip for 20 and 30-somethings who remember the show from their youth. The difference here though is that while with a lot of old shows watching them now is almost painful, Doogie Howser is still quite fun. Yes it looks old, a little creaky and the quality and sophistication of TV has come a long way in the last couple of decades, but the show’s sweet and charming core shines through and ensures it’s still worth watching.

And who knew that 23 years on Neil Patrick Harris would be an openly gay man who’s one of the most in-demand talents in Hollywood for everything from opening the Oscars to family film adventures? It’s certainly a long way from Doogie Howser, especially considering that for a very long time the actor was so associated with the role that it didn’t look like he’d ever outgrow it.

Now all we need is a similar mainstream series about a gay teen, which is, after all, what Neil really was at the time.

Overall Verdict: It may be a silly series that looks and feels like it comes from a very different era, but Doogie Howser is still sweet, charming and very watchable.