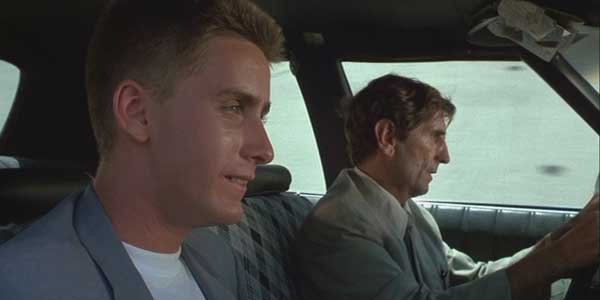 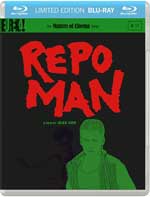 The film tells the story of Otto (Emilio Estevez), who quits/gets fired from his supermarket job and almost inadvertently ends up working as a repo man after a run in with an experienced repossessor called Bud (Harry Dean Stanton). That leads him into an increasingly bizarre world involving a car that disintegrates anyone who looks into the trunk, people looking for the body of a dead alien, blond-haired men in black and Otto’s punk friends/thieves.

It’s a strange film shot through with post-punk anarchism that means it always feels like it’s on the edge of collapsing into stupidity but holds together to create an entertaining, peculiar and humorous ride. Even moments that seem amateurish and as if they’ve fallen in from another film add to the movie’s charm, giving it a somewhat guerrilla aesthetic. Cox and many others involved were making their debut with Repo Man and their willingness to bend the filmmaking rules really pays dividends. You can see why some short-sighted idiots thought the filmmakers were commies, not because they were, but because it’s a film that difficult to pigeonhole, and so they took its satirical critique of capitalism as meaning the film supported the USSR.

The truth is though that Repo Man is a movie that seems like it’s about something, while not really being about anything. It hints at ideas and a meaning – the fact all products in the film come in generic white packaging with the name of what it is on it, the philosophical musings of some of the characters – while never quite attaining anything. That’s not a criticism, as if the movie is about anything, it’s the meaninglessness of the modern world and directionless many young people feel. Indeed in much of the special features, Alex Cox still seems to be in search of what Repo Man is actually all about himself.

Mostly though, it’s just a silly but very entertaining ride that well in tune with movie history, particularly the b-movies of the 1950s. For example the idea of having a mystery apocalyptic device in a car trunk was obviously inspired by 1955’s Kiss Me Deadly, which featured something similar (and both Kiss Me Deadly and Repo Man later inspired the glowing suitcase in Pulp Fiction). On the downside it does have a very 80s attitude to gay people, with Otto assuming Harry Dean Stanton’s ‘a fag’ when they first meet, and a whole conversation about whether John Wayne’s ‘a fag’. It’s not exactly a bastion of gay rights, and is very much the product of its time, but as long as you can look past that it’s very good.

This Masters Of Cinema Blu-ray edition of the movie offers a brand new HD transfer of the movie. It looks remarkably good, especially considering it’s a very low budget movie that’s nearly 30 years old. There’s very little grain, the clarity is surprisingly good and the whole thing is generally very crisp. Normally with movies over 10 years old you have to make allowances for their age when they get a BD release, as the high-def picture is limited by flaws in the original master, but Repo Man has scrubbed up remarkably well, managing excellent picture quality without losing any of its somewhat down and dirty aesthetic.

There’s also an excellent selection of special features, including a new, interesting introduction from Alex Cox, who talks about the movie, the reasons it’s lasted in people’s memories and the troubles they had getting a decent release for it in the first place. Cox is also on hand for the very thorough audio commentary, as well as the documentary ‘Repossessed’, in which he sits down for a retrospective chat with producers Peter McCarthy and Jonathan Wacks about the film, what it’s about and its impact. Also worth a look are the deleted scenes, which for some reason Cox decides to share with Sam Cohen, inventor of the real neutron bomb.

For the first time ever on either DVD or Blu-ray, this release includes the somewhat legendary TV version that Alex Cox put together. It’s slightly longer than the theatrical cut, but what made it famous was the obviously overdubbed dialogue, where insults like ‘melon farmers’ have become famous in their own right. With a lengthy interview with the wonderful Harry Dean Stanton, a 44-page booklet compiled by Cox, and various other bit and pieces, it’s an excellent selection and ensures this is a superb release.

Overall Verdict: Masters Of Cinema does it again, giving a superb Blu-ray release to a cult classic that it’s well worth revisiting.