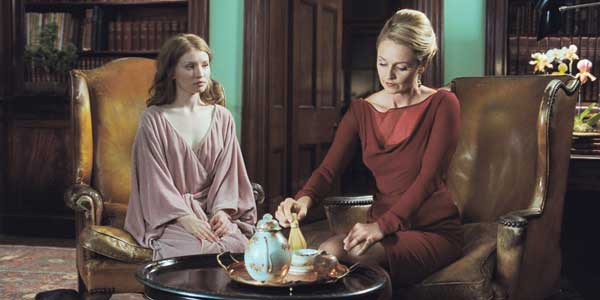 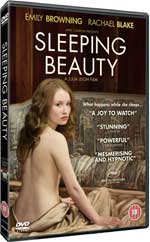 Sleeping Beauty is not an easy film, I’m not even sure it’s a good one, but it does suggest Julia Leigh is a filmmaker to look out for in the future, even if her debut effort is more a series of effective moments than a truly successful complete film.

Emily Browning stars as Lucy, a rather disconnected young woman doing everything she can to make ends meet while also trying to study. However she doesn’t seem that interested in her life or those around her. She answers an advert for a very well paid job, starting off as a sexy silver service waitress at events for old horny men. However the job turns into something else, with Lucy agreeing to be a Sleeping Beauty, where she is drugged, falls asleep and is then visited by men. When she wakes up, she can’t remember what has happened, although the woman who arranges it all promises her ‘vagina is sacred’ and will not be penetrated.

The film features some wonderful sequences, and the three Sleeping Beauty scenes, where the older men all want something different from their unconscious, utterly submissive ‘toy’, are absolutely brilliant. The problem is that while it’s a film about a woman who feels disconnected from life, the movie feels rather disconnected from itself. There’s little sense of it building a portrait of Lucy or of how things link together. While there are certain moments where you get a sense of progression – such as Lucy not consciously remembering what happens in the sleeping beauty chamber, but deciding to wear underwear to bed – much of the time it feels you could knit the scenes together in a completely different order and come up with a different series of connections (in fact, that would be a fairly interesting experiment).

Leigh seems to be channelling Kubrick, with the look of the sleeping beauty room echoing the final sequences of 2001, while the detached look at people in erotically charged situations seems to be inspired by Eyes Wide Shut. Also like Kubrick is its extremely long, static takes and minimalist style, as well as its use of sound, with the soundtrack feeling quite empty and deliberate, with a very spare use of music. However the film perhaps takes things a bit too far, so that its Kubrickian objective eye starts to move into the arena of feeling slightly obtuse and that for much of the time it’s difficult to find human connection in what you’re watching. It almost gets to the point that the most empathetic characters are the creepy old men, who are at least reaching out for some sort of connection, even if it’s an unpleasant, perverse, utterly controlling connection.

Emily Browning as Lucy is great though, putting in a truly committed performance. Michael Fassbender was praised as brave for his performance in Shame, with some saying it was hypocritical as people were only saying he was brave because he got his cock out, and that they don’t say the same thing about women who appear nude on screen. However Browning’s performance is brave in exactly the same way, where being naked isn’t about taking your clothes off (although she spends much of the movie in various states of undress), but the openness and vulnerability you allow the camera to see.

That said though, my main feeling about Lucy by the end was that she was an idiot – what I couldn’t decide is whether we were meant to think she was an idiot. She is passive about life in the same way she’s passive in the chamber, but the film seems unsure whether she’s foolish for not engaging in her own existence, or if she’s a victim of it – indeed in an interview on the DVD, Leigh seems to treat it as something that simply is.

It’d be fine if it felt like Sleeping Beauty was raising this as a question, but that’s where it departs from Kubrick, who always had a singular vision that this feel seems to lack. Wonderful scenes simply don’t come together to add up to the sum of their parts, so things feel unclear and slightly cold rather than intriguingly ambiguous and engrossing. And if you were hoping the cast & crew interviews on the disc would make everything clear about exactly what the filmmakers intended, they help a bit, but not completely.

I ended up giving it four out of 10 as I don’t feel it succeeds as a complete film, but it almost deserves another point or two for being challenging, somewhat thought-provoking and full of excellent moments.

Overall Verdict:  Julia Leigh certainly has a voice, but here it’s rather indistinct. She’s created a challenging, sexually-charged movie, full of fascinating, nicely constructed scenes – which is the reason it was invited to compete at Cannes – but its lack of cohesion ultimately undermines it.