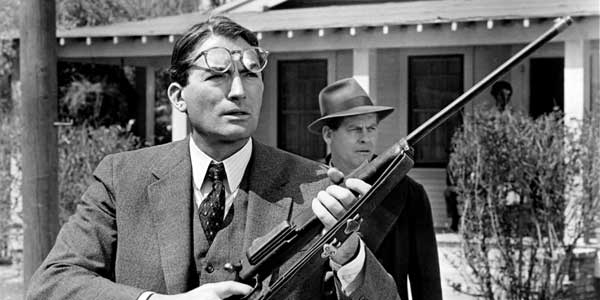 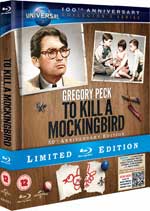 There are a lot of classic books that have been made into very good movies, and a lot of classic movies that are based on very good books, but To Kill A Mockingbird is a very rare beast – one of the greatest books of the 20th Century, turned into one of the greatest movies of the 20th Century. It’s an almost perfect movie adaptation, which understands perfectly what makes Harper Lee’s novel work and manages to bring that across into a different medium. And now it’s getting an HD restoration and upgrade to celebrate both its 50th birthday and Universal Studios 100th anniversary.

The great ‘trick’ of To Kill A Mockingbird is, of course, that it’s a very dark tale told through the eyes of children, ensuring not just that it’s easily accessible but also that the innocence of a child can absolutely undercut the insidious racism it deals with. The other ‘trick’, if you can call it that, is to make its hero a quiet man who does things simply because it’s the right thing to do, with no need to shout about it.

Told through the eyes of young tomboy Scout, we’re taken into the world of Depression-era Alabama, where young black man Tom Robinson (Brock Peters) has been accused of raping a white woman. Scout’s father, Atticus Finch (Gregory Peck), agrees to represent him, with most white people in the town feeling he shouldn’t actually do much to defend Tom. However Atticus believes a man deserves a strong defence no matter who he is, as that’s what the legal process he represents is built on.

As the children watch, the ugliness of racism is revealed, with the movie (and book) managing to make wonderfully complex and subtle points about what happens when you start treating people as something ‘other’. Despite this, it never feels like it’s being preachy. With its child’s eye point of view, it strips things down to simple questions about fairness, dignity and humanity.

Few films have ever dissected racism so succinctly and while you could argue it over-simplifies things, it’s dealing with the core ideas of respect and treating others equally, and the truths it reveals about them are universal. It’s a message that still strikes a chord, and not just in terms of racism. Whether it’s gay marriage or anything else, To Kill A Mockingbird’s message that we are all equal and deserve to be treated fairly, still resonates.

When the AFI drew up its list of Greatest Heroes in American film, Atticus Finch came out top. You can see why, as he’s a wonderful role model who tells us that the individual can make a difference and that doing the right thing – and standing up for the right thing – matters. If the only thing that’s needed for evil to succeed is for good men to do nothing, Atticus Finch is the argument that doing something matters – you don’t have to succeed, you just need to do what’s right, and that alone makes a difference.

The film, like the book, is touching, inspiring, surprisingly dark, sometimes sickening and yet hopeful even at its darkest moments. With subplots about the infamous Boo Radley that underscore the points made in the movies, it is a truly wonderful film with a magnificent central performance from Gregory Peck.

Indeed, Peck and To Kill A Mockingbird have become so inseparable that the majority of the special features are about him. There’s a feature-length documentary about the actor, plus excerpts from awards ceremonies and tributes, giving you a good overview of the man and his dedication to his art. Also included is another feature-length documentary, ‘Fearful Symmetry’, which offers a fascinating look at the making of the movie – and it was surprisingly tough to get it made, as while the book became an instant classic, Hollywood was still wary of adapting it at a time when racial tensions were rising and the Civil Rights movement still had a long way to go.

However, with this being a Blu-ray release, the real question is what does it look like in HD? Along with All Quiet On The Western Front, this is the first of the movies Universal has restored and is bringing out on Blu-ray as part of their 100th Anniversary celebrations.  It’s a very well executed restoration, that doesn’t overdo the cleaning to the point where everything looks plastic, but gives the movie a good scrubbing so that the clarity is superb. It’s often surprising how good black & white movies can look on Blu-ray.

Colour movies of the same vintage rarely pop off the screen in the same way, so that it’s difficult to believe it really is 50 years old. The reason is largely because b&w film stock lasts much better than colour, so when it comes to restoration it’s easier to take it back to a clarity close to what it looked like the day it was made (and sometimes better). Properly restored black & white movies also reveal that while it might all be in shades of grey, the cinematography of many old movies is truly magnificent.  To Kill A Mockingbird certainly looks good, with a loving restoration that brings out the best in the film.

Overall Verdict: A great restoration for a wonderful movie, which remains not just one of the best films ever made about racism, but also about the importance of treating other with respect and of doing the right thing.