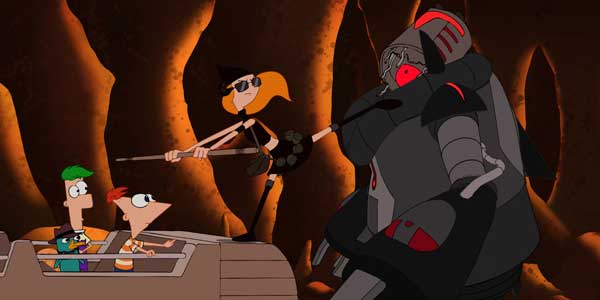 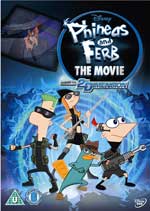 I have to admit that I’m a bit of a latecomer to Phineas & Ferb, although in my defence 30-something men aren’t usually required to keep up with the latest developments in kids TV. However the cartoon stepbrothers are insanely popular, with Disney claiming that 1 in 2 kids watch the show, and that it reaches an insanely impressive 289 million viewers around the world. It’s not surprising therefore that it’s getting a movie, even if it is a straight-to-DVD one.

While it helps to have watched some of the show on Disney Channel before you see the film, it’s certainly not compulsory. If you don’t know, Phineas & Ferb are stepbrothers trying to enjoy their summer, who spend their days inventing all manner of incredible things. However what they don’t realise is that their beloved pet Platypus, Perry, is also secret agent P, who thwarts the plans of the evil but rather dim Dr. Heinz Doofenschmirtz.

In Across The Second Dimension, Perry is strongly warned that he can’t let the boys know his secret identity, which causes a problem when he’s sent to stop Doofenschmirtz from using his new machine to open a door to another dimension. When Perry gets to the bad guys lair, he finds Phineas & Ferb helping to fix the machine and so can’t become Agent P without his owners realising who he really is. This results in Phineas, Ferb, Perry and Doofenschmirtz ending up in another dimension, where another version of Heinz has taken control of the entire tri-state area – and even then Perry can’t keep his secret, as Phineas & Ferb realise he’s an agent.

There’s a good reason Phineas & Ferb is so popular, and that’s because it’s funny, smart, fast paced and very entertaining. Like the best kid’s shows it’s also got plenty to amuse adults, with a rather Spongebob-like postmodern take on everything that happens, so that’s it’s constantly commenting on itself and the nature of television and movies. Admittedly you can get away with a lot more in animation, but it does seem like a lot of the most inventive and funny writing is going on in cartoons, and Phineas & Ferb has more than its fair share of that. The script for Across The Second Dimension is incredibly witty and moves at such a fast pace that there is more than enough humour for everyone from the smallest of youngsters to grown-ups who haven’t properly grown-up.

Watching Across The Second Dimension I was rather jealous of children, who seem to get so much entertainment that’s just pure fun, while so much stuff that made for adults is so po-faced and dull. Phineas & Ferb certainly scales up well from 15-minute episode to a full-length film, with more than enough invention, music and japes to keep everybody entertained.

Alongside the film are a few special features, including ‘Dr. D’s Jukebox-inator’, which allows you to jump straight to the songs, and you can sing along with the ‘Perry-oke’ track, where the platypus helps you keep track of the words. There’s a selection of deleted scenes, which include a couple of excised songs, and the episode ‘Attack Of The 50ft’ with an optional commentary from the creators of the show.

Overall Verdict: Phineas & Ferb are great and whether you’re a newcomer or a dedicated fan, Across The Second Dimension is an incredibly entertaining feature-length adventure full of wonderful wit and inventive humour.