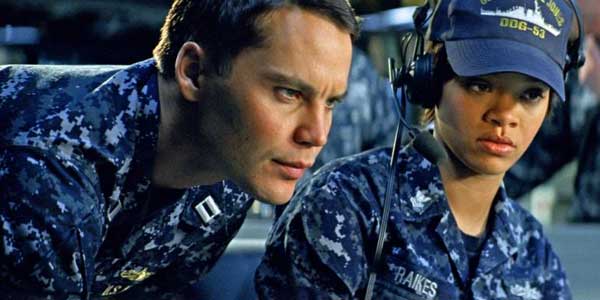 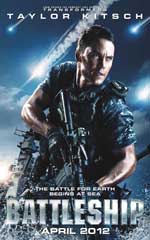 This is basically the premise of one of the most anticipated films of the year – which to be honest isn’t a great state of affairs, if this is all Hollywood can deliver. That said, with an estimated budget of over $200M, you have to hope it’ll do better than last years’ two alien invasion efforts, Skyline and Battle Los Angeles.

In Battleship, Aliens have decided to visit Earth due to our scientists messaging another planet that’s similar to our homeworld and could possibly sustain life. No actual proper explanation is given as to why they are here, but it is insinuated that they are a war faring species. The Aliens themselves look interesting, almost appearing half human and half amphibian, and they have an aversion to bright sunlight – which will obviously come in handy at a later stage for our patriotic American heroes

Following the usual formula, the aliens arrive and worldwide panic ensues, showing us the reactions of capitals across the world, including recent London riot footage. There’s also plenty of paranoia – is the technology North Korean? However surprise surprise, it is left to the American fleet, along with some Japanese officers (so it’s at least nominally international), to save the world from imminent destruction.

For the human element you can add in two handsome brothers, both naval officers, played by Taylor Kitsch and Alexander Skarsgard. There’s also the always dependable Liam Neeson as Admiral Shane, Brooklyn Decker as the love interest (who also happens to be Admiral Shane’s daughter), and Rihanna as the wise cracking, gun toting, Raikes.

The problem with the film is that it suffers from every cliché imaginable. The dialogue is dire and every hoary old war movie chestnut is thrown in, with everyone from battle amputees to WW2 veterans (reminiscent of Space Cowboys) all doing their bit for Uncle Sam. There’s nothing intrinsically wrong with a bit of patriotism, but here it’s being used in place of a plot with at least a nod to originality and as a cheap way to try and artificially add emotional resonance. I almost expected to see Cher sitting astride one of the ships’ guns singing ‘If I Could Turn Back Time’, which to be honest wouldn’t have been out of place with the rock soundtrack underscoring most of the battle scenes.

One of the major inconsistencies is that the aliens themselves have far superior technology, but inexplicably don’t attack the final battleship or anyone unarmed initially – thus leading them to their inevitable downfall (sorry if you feel that was a spoiler, but did you really expect the film to end with aliens having taken over Earth and humanity either dead or enslaved?). It would appear these extra-terrestrials have spent so much time on their weaponry that they don’t even understand rudimentary war strategy.

In its favour the film does often have some amusing scenes, even if the humour is often outweighed by the unintentional laughs when the patriotic speeches spew forth. At times the film plays a bit like Independence Day with amazing special effects including the ripping apart of ships and especially the wrecking balls, but it fails partly due to the lack of a charismatic lead such as Will Smith. The strongest and most believable characters are Liam Neeson, Alexander Skarsgard and, surprisingly, Rihanna, whilst Taylor Kitsch delivers yet another turkey after John Carter.

Will the rookie played by Kitsch get Liam Neeson’s permission to marry his daughter?  Will the Aliens be defeated? What do you think?

Overall Verdict: Amazing special effects and it will be a massive hit Stateside, but with too many clichés and inconsistencies, yet another blockbuster fails to deliver. If you want to see a ship sinking watch Titanic, and if we are going to have a good alien film this year, let’s hope Prometheus delivers!