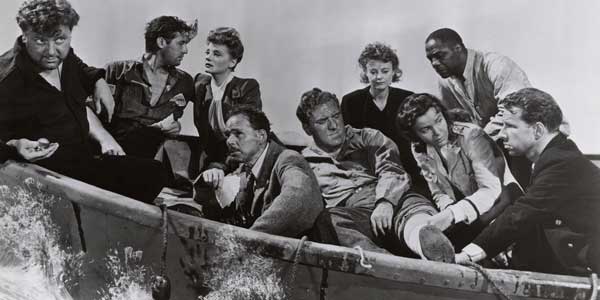 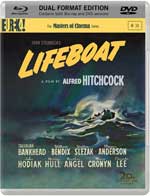 The problem is that none of them know where Bermuda is. However there’s one person on board who does appear to be able to navigate, a German U-boat survivor who might have been the captain of the vessel. But can they trust him?

Hitchcock was always fascinated by playing with the cinematic form, and as with his later Rope and Rear Window, here he experiments with whether you can make a succesful movie set in a single, contained location, without boring the audience. If you watch nearly any of the films that were remakes of or inspired by Lifeboat, of which there are quite a few, you’d think the answer is that you can’t make a successful single-location movie, but Hitchcock proves you can. Indeed his mastery of the form is such that after a while you completely forget that you’re just looking a few people in a small boat from different angles.

Hitch was also smart enough to know that if you’re going to experiment, you need characters and a well-written screenplay that make sense for the unusual form. For Lifeboat he commissioned none other than John Steinbeck to come up with the story, who produced an unpublished novella from which the script was written.

This ensures that there’s plenty going on in Lifeboat beyond a bunch of people in a boat, with characters who feel real and yet represent types – the truth seeker, the socialist, the capitalist etc. The main crux of the film revolves around their reaction to the supposed common enemy, the German. The film actually got into trouble with some critics and commentators on its 1944 release, for not making its Nazi a snarling, moustache-twirling bad guys with the word ‘Evil’ tattooed on his forehead. Hitchcock certainly doesn’t make him a good guy – he was rabidly pro-allies and spent much of the war making propaganda movies – but he does question the idea of demonising the entire German population, how people’s ideas can change in stressful situations, as well as both the strengths and weaknesses of group, us vs. them thinking.

But like most Hitchcock movies, while there’s a lot going on under the surface, it’s mainly just an entertaining and easy watch that magnificently overcomes any issues the limited setup may have caused.

This release offers both DVD and Blu-ray versions of the film. While the HD edition is definitely a step up from the DVD, you can definitely still see the film’s age, with a fair amount of grain and a picture that’s occasionally rather soft. However for a 68-year-old movie, it doesn’t look bad at all, and it’s obvious plenty of care has been taken to ensure this is the best presentation possible of the aging movie.

There are also some worthwhile extras, including a very interesting ‘making of…’ featurette in which Hitch’s granddaughter and various experts talk about the making of the movie, from the injuries people received being tossed around in the boat to the involvement of Steinbeck. A bit more behind-the-scenes info is provided by Hitch himself in a 12-minute extract from the famed Hitchcock-Truffaut interviews, during which he talks about Lifeboat.

Most interesting for fans of the master director are two French-language shorts that Hitchcock made as wartime propaganda directly before Lifeboat. Neither are particularly brilliant, although for propaganda movies they’re quite fun and wonderful little nuggets of film history. With this Masters Of Cinema release also including a 32 page booklet crammed with info, it’s a great little package for a great little film.

Overall Verdict: It may not be one of Hitchcock’s most watched movies, but it’s a great little film in which the director wonderfully manipulates the single setting to create a film that never gets dull.