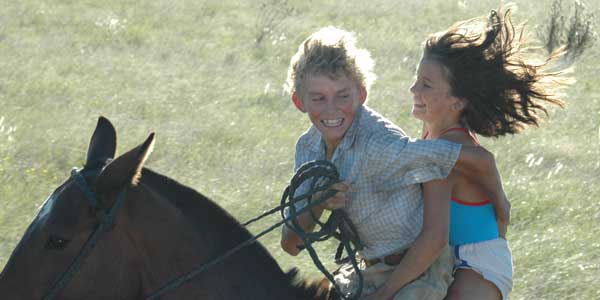 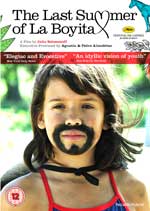 Why do people in rural Argentina, a country that speaks Spanish, look like they just fell out of 19th Century France? The continental cultural melting pot always adds an extra layer of interest to South American movies, where various European cultures from all sorts of different eras butt up against indigenous cultures and the modern world. That’s in the background of The Last Summer Of La Boyita, a charming and somewhat brave film that takes a look at the ambiguity of gender, as seen through the eyes of children.

It’s summer and Jorgelina (Guadalupe Alonso) is a young girl looking to have fun, but who feels slightly like she’s been left behind by her older sister, who’s started puberty and no longer seems interested in playing with her. Jorgelina’s father then takes her off to his farm, where she meets up with the farm worker’s son, Mario, who she’s known for years. However while Mario is getting to the age where he’s expected to prove himself as a man, he’s undergoing unexpected changes which he wants to keep secret. Jorgelina realises it seems like Mario’s menstruating, but she also knows boys don’t do that. So what’s happening?

Last Summer Of La Boyita touches on all sorts of subjects, many of which rarely get explored on film. The film’s central theme is gender and how it expresses itself as children age. Looking at things through the eyes of a child, it shows just how complicated these things can be. Children’s ideas of gender are largely created by looking at the world around them, and that this can be more complicated than it first appears. Although we normally look at sex and gender as the same thing, they’re not, and this film looks at how they separate out, with several scenes focussing on how gender is often both wittingly and unwittingly an act of performance, especially in childhood when people are looking to fit in and seeing how they’re expected to act.

The movie doesn’t come to many conclusions, and indeed the film’s understandable but somewhat loose explanation of exactly what’s going on with Mario leaves a lot of questions open about how far gender is innate and how much a social creation – but as no one has come to any firm conclusions about that, it’s asking a bit much for a film to definitively sort it out for us.

The Last Summer… is an interesting counterpoint to the recently released Tomboy. In that movie a girl spends the summer as a boy, whilst everyone in Last Summer Of La Boyita believes Mario is a boy (including Mario himself) but things are a bit more complicated than that. Both films explore the boundary between our expectations of sex and gender, and the differences between them, particularly in childhood when our ideas about these things are formed. They’re also both wonderful films that are both challenging and rather bittersweet.

It’s a fascinating subject, but one most filmmakers shy away from due to the fact it’s potentially controversial. Last Summer Of La Boyita treats it sensitively, constructing a moving and beautifully put together movie around its central themes. And while some may feel Mario’s parents’ lack of attention to their child’s situation is unrealistic, anyone who’s watched a lot of ‘Bodyshock’ type documentaries will know that it’s actually not that untypical for those with a lack of education and who live apart from the modern, industrialised world.

The film may not be fast moving and some may be frustrated by the way it asks more questions than it answers, but it’s a style that’s thought provoking and draws you in to its world of childhood and the confusions that presents. The Last Summer Of La Boyita is a small film that’s well worth watching.

Overall Verdict: The ambiguity of gender is a subject that rarely gets treated well on film, but with Tomboy and Last Summer Of La Boyita, we’ve had an excellent double whammy in early 2012.