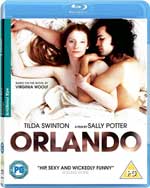 Based on Virginia Woolf’s classic novel, the film follows young nobleman Orlando (Tilda Swinton), who is ordered by Queen Elizabeth I to stay young forever. Miraculously he does, with the film charting Orlando’s life over four centuries. Over time he courts a young Russian woman, becomes patron to a poet, and then heads for Constantinople to represent the Crown. Once there another miraculous things happens (well, miraculous to us, but seemingly not to Orlando), as he changes from a man to a woman. While she retains the same mind and personality, she finds the world is rather different for a lady, not least that she can’t own property as a woman.

In the years since it was made, Orlando has become a bit of a fave in film and media studies classes, largely because it’s a good example of a movie that shows there are different ways of making a movie than going for traditional narrative tropes, but it’s as not horribly difficult to unpack the meaning of what going on as it is with many post-modern films. Admittedly some will never get past the oddness of someone who stays young for no real reason, changes sex randomly and where it’s not 100% clear if Orlando actually lives across a full 400 years or if time jumps forward or is somehow melded together. Like I said at the beginning of the review, if you’re very literal minded you’ll hate this.

Others however will appreciate the thought-provoking ideas and intriguing way the movie is told. Orlando is in essence a meditation on opposites – man/woman, mortal/immortal, love/hate. Some of what it says is rather basic (again why it’s popular in introductory media classes), but there’s also a lot that’s actually quite complex packed into the movie. It is most interesting and most notable, like Woolf’s book, for its ideas about gender. Although modern science and thought might not agree with exactly how it’s presented, there is a profound idea in there about how the individual self is separate from things like the expectations of gender and sexuality, and how the way the world often sees these things is divorced from the way we see ourselves.

The most memorable thing about the film is probably Tilda Swinton, who is simply wonderful in the title role. This is the movie where the world first started really paying attention to her, and it’s little surprise as she is absolutely masterful is showing a character who can be both man and woman but is always the same person. Swinton had previously appeared in several Derek Jarman movies, and his influence, as well as Peter Greenaway’s, is evident in Orlando.

To be honest, Virginia Woolf’s book is better than the movie, with Potter’s film sometimes coming across as a potted, slightly disjointed version of the novel, with various aspects changed completely (and not always successfully). It is nevertheless an always intriguing movie, which looks superb, something that’s really highlighted in this new Blu-ray version. Some bits of the movie do look rather grainy, but mostly it’s a big step-up in quality in HD.

There are also some great special features. The movie was one of the first to be shot in places like Russia and Uzbekistan as the Iron Curtain was falling. The disc includes lengthy and very interesting video diaries about going to those countries, which offered some of the wonderful, unique looking locations that are so memorable in the film.

Overall Verdict: Orlando is definitely a curious movie, but as long as you’re not too literal-minded it’s an intriguing meditation on things such as sex, gender and sexuality.