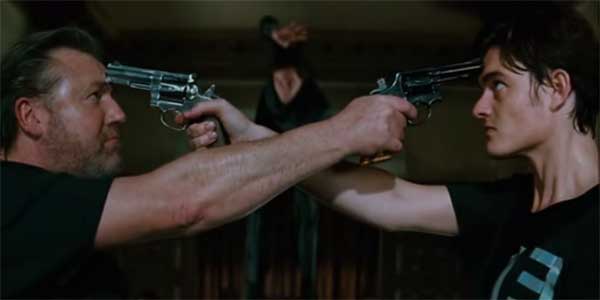 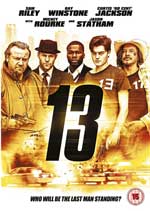 The French film, 13 (Tzameti), shocked cinemagoers around the world with its back and white edgy raw filmmaking, and left stark unforgettable images ingrained in your mind long after you had seen the movie. The remake does nothing of the sort.

Sam Riley plays the role of Vince, a young electrician, who overhears that one of his clients made lots of money by doing something very secretive that haunted him to his dying day. Sam then steals his identity in the hope of getting rich quick. He foolishly stumbles upon a very dark and seedy world where men gamble on the lives of others, and there is no turning back for him. This secret organisation consists of everyone from the filthy rich to desperate gamblers, who gamble on men stripped of their dignity and identity, who are then forced to wear T shirts with their allocated number – hence the no. 13 of the title that Vince is chosen to wear. They are then forced to stand in circles playing Russian Roulette.

Each of the players has their own story, but needlessly to say only a couple of them are touched upon e.g unsurprisingly Ray Winstone and Mickey Rourke! Each player stands in a circle and then follows the instructions laid down by the very enigmatic and colourful Michael Shannon (Boardwalk Empire – who is the only stand out in the film) as they raise their guns to head of the person in front of them, pulling the trigger as a lightbulb goes on.

The problem with the film over the original are the star turns, whilst the film is written and directed by Gela Babluani, who directed the original, he has failed to capture the intensity and edginess of the original, even the simple but very effective light bulb scenes fail to work in colour. Jason Statham, Mickey Rourke and Ray Winstone basically play the same characters they usually do in their films and are given needless characterisations which are not required. The original film dealt more with the situation Vince was drawn into and you could almost smell the fear, while this remake has taken away all the original intensity and has delivered us a very poor Hunger Games for adults with guns.

Even the DVD’s cover seems wrongly pitched. It looks like a colourful rehash of Snatch or any other British Gangster movie, when it would be more effective if it displayed a black and white cover in the style of say Man Bites Dog, which would be more representative of the content we would hope to see.

Overall Verdict: The film is not a disaster by any means, and will be enjoyable to any Ray Winstone fan, but more discerning movie buffs should stick to the original.