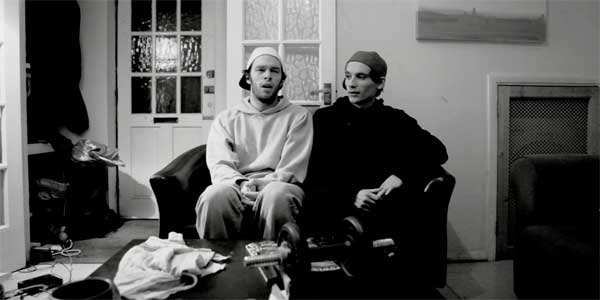 Benny is throwing a leaving party for his ‘B.F.F.’, Kanoute, who is returning to Norway. Finally having his friend to himself, Benny sees it as his last chance to tell Kanoute a secret that may spell the end of their friendship.

With a premise as simple as this, the pressure is on for this short to deliver on substance.

Any fears are dispelled within a few seconds, however, as the two comedians at the film’s centre launch into the gags. The pacing is very well constructed, keeping the momentum going as the jokes are delivered with expert timing. Daniel Swann’s charm and slight creepiness guides Daniel Sorensen’s impeccable cluelessness to unease, as it becomes obvious that there is more to this friendship in Benny’s eyes.

The filmmaking is drenched in confidence: the shot selection, editing and soundtrack tell the story with such fluidity you are sucked in. Director Fabio Youniss’ willingness to let his stars do their ‘thing’ belies his security as a filmmaker; he lets them go when they are on a roll, and paces them when the film requires.

As a comedy, this film is a good mix of Peep Show duo dynamic awkwardness and each comedian’s own stand-up stylings. The writing is witty and the delivery sublime. Yet, for all the laughs, good performances, and technical expertise, these are not the reasons it was named Best UK Short Film at Iris Prize Festival 2012. They are not what makes this film so good.

There is an extra element. A darkness that looms in the distance and falls upon the audience so unexpectedly and so smoothly it takes you completely unawares. Youniss lets the camera run as Benny tells Kanoute about his father, and how he reacted to Benny’s love of dancing. Daniel Swann’s performance in this short time keeps the humour going while unsettling you in your seat. The insecure Benny is unveiled as a rich, nuanced character, ultimately endearing and subtly tragic.

It is not a game-changer and it is not mind-blowing. It is, however, beautifully understated; a shining example of how best to utilise the medium of short film.

Overall Opinion: Genuine and touching; intelligent and funny. A Stable for Disabled Horses has a big heart and a strong lead in the form of Daniel Swann. It keeps you entertained, while tugging at your heart-strings. The effortless way in which the tone flows from light to dark is masterful.

Lacking in grand ambitions, the film is very simple, but therein lies its charm. It does exactly what it sets out to do: make you laugh and make you think. Filmmakers and stars alike confidently exhibit their potential. Keep your eyes peeled for their next efforts.