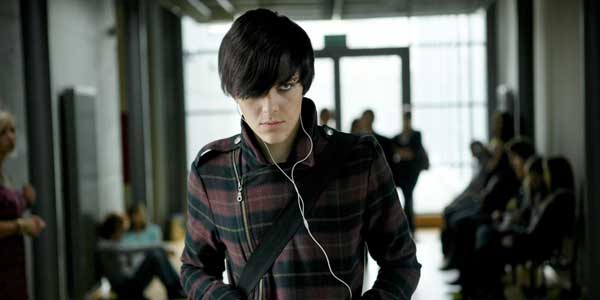 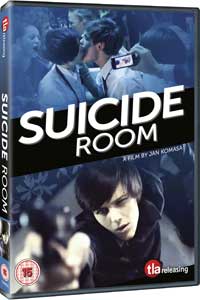 The Polish film Suicide Room is a strange beast; a tale of teenage angst and depression set partly in the real world and partly in a CG online realm (the titular Suicide Room). Dominik (Jakub Gierzal) is a rather emo teen, who’s surrounded by friends and thinks life is his oyster. However, after he’s dared to snog a good looking guy by his friends, he finds his sense of acceptance spiralling downwards, which gets worse when he has an orgasm during a particularly frenetic judo bout with the boy he kissed. His former friends begin mercilessly making fun of him online as his private struggle with his sexuality takes a very public form.

Dominik finds solace in an online world called Suicide Room, where he finds a group of people who seems to understand him, including the mysterious ‘queen’ of the realm, who Dominik begins to have webchats with. As real life gets increasingly difficult, he disappears further into his online life and refuses to leave his room, much to the annoyance of his parents. While his folks try to get him to return to the real world, the nihilist peer pressure of Suicide Room begins to become more dangerous and potentially deadly.

Suicide Room is a complex and sometimes difficult film, which deals with modern teen angst in a way that may be difficult for some older people to relate to. Dominik has grown up in a world of social media, where everyone’s life is played out online, where distance allows bullying to be more personal, creative and seemingly permanent. Against that backdrop it’s not that strange for him to be taken in by an online world, even if it may seem a bit peculiar to those who grew up before everything was digital. However Dominik is a somewhat problematic central character.

He varies from being rather tragic to a self-indulgent teen who’s his own worst enemy. It’s therefore sometimes difficult to empathise with him, and tough to know whether he’s genuinely depressed or just taking being a misunderstood teen to ridiculous lengths. The film seems to be deliberately playing with this, but it does mean your reaction to Dominik is that you’re as likely to roll your eyes at his journey as you are to empathise with it.

The mix of the real and online is interesting though, and you do begin to understand the sense of finally being understood that Dominik feels with his new friends. It’s also intriguing how it plays with the fact that while in one sense his circle of online friends is ‘real’, the virtual elements means it’s also prone to self-indulgent fantasy. And for someone as impressionable as Dominik (who’s already fascinated by cutting yourself before he goes to the online world), going to somewhere called Suicide Room is potentially fatal.

Back in the real world, the movie also looks at parents who are utterly blind to the truth about their child and won’t even consider any deviation from that plan. In Dominik’s case this pressure is compounded by the fact that his folks aren’t interested in any solution to a problem that isn’t pretty much instant, so a shrink who says dealing with Dominik’s problem may take some time is shown the door.

It’s undoubtedly all very intriguing, but with a protagonist who is as annoying as he is tragic, it’s sometimes difficult to fully invest in the film emotionally, even while it works intellectually. That said, I can imagine younger people who are used to living their lives online will relate to it a lot. Don’t expect a jolly ending though, although I imagine you guessed that from the title.

Overall Verdict: A complex look at teen life in a world where so much of life is lived online. Suicide Room takes you deep into a world where the real meets the virtual and fantasy becomes indistinguishable from reality. However the fact it’s sometime difficult to fully empathise with Dominik means it lacks some of the power it could have had.