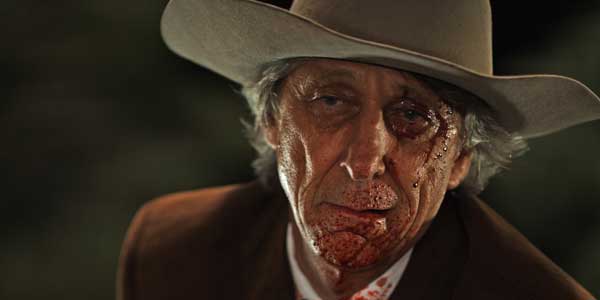 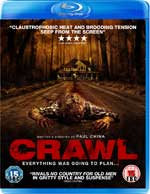 A mysterious Croatian man (George Shevtsov) arrives in a small Aussie town and shoots a local garage owner. He’s done it on the orders of the seedy bar owner Slim (Paul Holmes), who wanted the mechanic dead over a business deal gone bad.

Then there’s barmaid Marilyn (Georgina Haig), who heads home to wait for the return of her boyfriend, Tristan, who she is convinced is going to propose to her (Marilyn’s obviously never been in a movie before, as talking about how you’re expecting something good to happen is pretty much a guarantee it’ll all go pear-shaped).

It proves a long wait, because as the Croatian man heads out of town he accidentally mows Tristan down with his car, which sets off a chain of events that results in Marilyn being held hostage in her house, Slim thinking he’s been double-crossed and the hit man attempting to sort out the mess he’s created.

Writer/director Paul China and his producer twin brother Ben originate from the UK but have spent the last few years in Australia. However, their main influences undoubtedly come from the US. This is a movie that wears its love of the Coen Brothers and David Lynch loud and proud, with a dose of Hitchcockian, Bernard Herrmann style music thrown in for good measure. With many film this type of homage merely highlights how far from the masters the movie is, but the China brothers actually understand what makes the films they love tick. They may not yet have reached the top level yet, but the nods to everything from Blood Simple to Blue Velvet aren’t merely to try and look cool, they serve the movie in creating a strange, unsettled atmosphere of creeping menace.

While there are a few slightly cheap, cheesy moments, these are more than counterbalanced by some extremely well put together sequences, which use sound and clever editing to tell the story in ways that keep the viewer on the edge of their seat.

It’s not the most complex of tales and there’s the occasional sensation that things are on the edge of getting very silly, but with a tense atmosphere, some gruesomely effective scenes and a few moments of impressive style, it’s more good than bad. The best part of the movie is indisputably the Croatian, a man of few words who power through movie with no past or explanation. He seems utterly unflappable and never out of control, while remaining completely mysterious and unpredictable.

It may not be perfect, but Crawl is an impressive debut for a filmmaker who understands the movies in a way that promises much for the future.

Overall Verdict: Despite a few flaws, Crawl is a tense, creepy affair with a love of Lynch and the Coen Brothers that is more than skin deep.