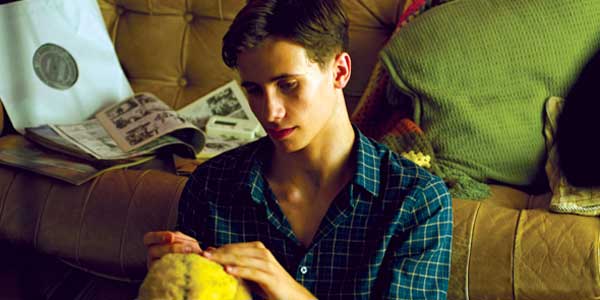 Animals follows teenager Pol as he tries to make sense of the confusing world around him. Sexual orientation, a pressure to fit in, and family expectations all seek to complicate his struggle to come to terms with adolescence. Fortunately for Pol, he is not alone, facing life with his imaginary friend ‘Deerhoof’, a teddy-bear who is very much alive. As a girl at school goes missing, Pol’s infatuation with the new boy, Ikara, takes a dark turn and he takes extreme measures to leave behind childish fantasies and find himself.

The film is very much like the protagonist: it does not seek to fit into any predetermined pigeonholes, or fulfill your expectations of a story. And, like Pol, it feels a little confused. There is little narrative to speak of, rather, in Lynch-ian style, it is a series of events that occur within the world that’s been well crafted by director Marçal Forés.

Like Lynch, there is a lack of fluidity: it is character driven, reflecting the randomness and unpredictability of life. The true-to-life characters and the chaos heightens the realism and exaggerates the juxtaposition of the more surreal elements. The world is very much real and alive: the prominent Foley steeps you in a creepy atmosphere that harks back to Donnie Darko. The foreboding is broken on several occasions by over-loud, ill-fitting songs, which jolt you from engagement and spoil the well-crafted atmosphere.

It is very difficult to create believable characters, but every single person in this film could be someone you know in your day to day life. You can’t stereotype them or build comparisons: the skill with which this is done, as well as how it’s combined with the fairytale quality, is unique and very impressive.

The characterization, while realistic, does fall flat in places, particularly with Pol. He is portrayed as ‘complex’ but often comes across unsympathetic and mopey. The film also does little to endear the audience to Deerhoof: his soulless voice is creepy, and while there are cute moments – such as when he comforts Pol as he is at his lowest – the toy seems threatening. You feel he is ‘coming for’ Pol, rather than ‘coming to’ him. The impending-doom soundtrack does not help!

There are some standout performances, in particular a rather understated Martin Freeman, and Dimitri Leonidas as Pol’s wacky friend. The dialogue is witty, convincing, and at times very funny. Animals is a brave attempt to explore the medium of film. Visually beautiful, the shots and direction are confident, and the fairytale-esque moments are wonderful. The film presents many unanswerable questions, embracing the unfathomable complexity of personality. Our individuality doesn’t need explanations: we just are. It’s refreshing to see this put on film. Having said this, many of the film’s strengths are undermined by a drawn out finale and one gratuitous scene (a school shooting) which is handled insensitively, trivialising dark subject matter.

Overall Verdict: If you enjoy the unease and unpredictability of Lynch, as well as the gothic sweetness of Donnie Darko, you will enjoy this. The general feel of the film, from setting to characterization, does feel derivative Richard Kelly’s masterpiece, but Animals has its own strengths. Forés work is unsettling and yet slightly self-indulgent, trying to toy with the audience. For those who are looking for more traditional storytelling and less mind-meddling, search elsewhere.