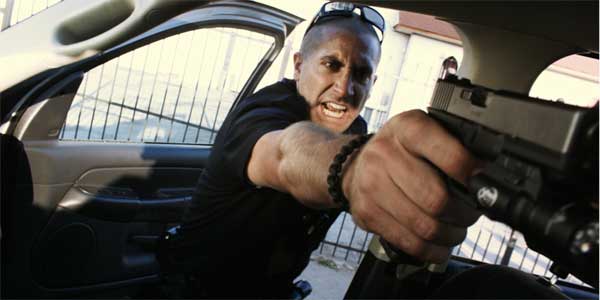 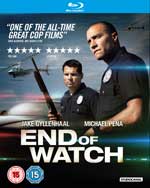 David Ayer has made a career writing and/or directing movies about gangs and the police, such as Training Day, S.W.A.T, Street Kings, Harsh Times and now End Of Watch. The movie is an attempt to bring a bit of mockumentary-style realism to the cop flick, although as viewers will soon realise, it’s actually a mix of mockumentary and extreme shaky cam (either that or Jake Gyllenhaal’s character doesn’t mind getting a friend to videotape him having sex with Anna Kendrick).

It’s a trick that’s been a little bit of an audience divider, as while many have found that it adds immediacy and gives the genre a fresh twist, others have found it contrived and rather annoying.

Gyllenhaal is policeman Brian Taylor, who along with partner Mike Zavala (Michael Pena) is just back on the beat after internal affairs clears them in the shooting of two perps who opened fire on them. Brian has decided to film everything for a class he’s taking, and so we follow them as they head out on the beat, attempting to take down the bad guys in the dangerous, gang-filled South Central area of LA. The villains also have their cameras out, filming themselves as they conduct drive by shootings against rivals.

Not willing to just keep their head down, Mike and Brian takes a few risks that result in some major drug and human trafficking busts. This brings them to the attention of one of the major cartels that has moved into the area, who decide they want these cops gone.

The plot itself is fairly standard stuff, running through a series of clichés to get from the beginning to the end. However the mockumentary angle does make things seem surprisingly fresh and keeps the excitement up as it weaves its way towards a rather downbeat ending. Where it works best is allowing us to see the camaraderie between the officers, with several extended scenes of their banter and friendship as they drive around South Central. Gyllenhaal and Pena are great, really anchoring the movie and helping to hide its flaws. While a lot of movies like to talk about bromance, End Of Watch really shows what that means for partners of the beat – by the end it almost becomes a love story about the men.

There are a few flaws though, not least the cop clichés. It’s also slightly perturbing that the film presents Mike and Brian as unalloyed heroes, when their attitude is actually probably exacerbating an already bad situation. Indeed, they seem to spend much of the film doing things that might seem heroic and which give the bad guys their comeuppance, but they do it in a way guaranteed to make the bad guys even badder. You could read the film as ultimately showing that, but generally any character who tells them they perhaps need to handle things a little differently is treated as a jerk. Indeed you could see their camaraderie as being good for them but ultimately problematic for good policing, as they have a tendency to push each too far.

If you don’t go too far into the politics of the movie, it is entertaining. Although shaky-cam haters will absolutely loath the movie, others will find its mockumentary tricks an effective way to give a fresh spin to some fairly old ideas, which takes you into the heart of the movie’s grit and violence.

It also looks good on Blu-ray, so good in fact there’s no way you’ll believe Brian really shot a fair chunk of the movie on a button camera attached to his uniform. However  HD ensures the film is really sharp, with a slightly hyper-real sheen that look a bit like hi-def sports, which once more adds to the immediacy of the movie. Likewise the audio may be a bit too well mixed to be believably filmed by the participants, but the DTS surround track is very effective in shoving you into the middle of the (often first-person) action.

There’s also a pretty good selection of special features, including some decent behind-the-scenes featurettes and Bafta Q&A. Add to that interviews with Jake Gyllenhaal and Michael Pena, and you’ve got a decent selection. Also worth a look is the alternate ending, which is a rough cut (with sound effects etc.), but suggests things could have been even more of a bummer than they ended up in the actual movie.

Overall Verdict: Great banter and immediacy help ensure that what is essentially a bundle of cop flick clichés and dubious ideas about policing, makes for an entertaining and even sometimes moving watch.