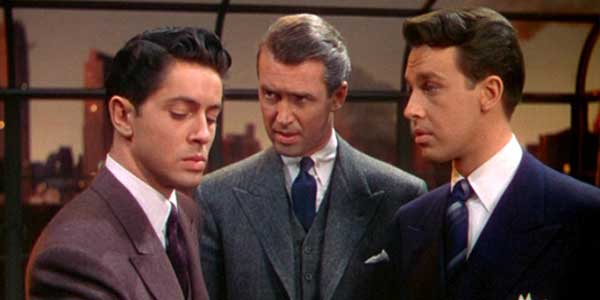 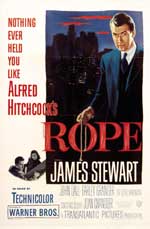 Seeing as Hollywood operated under a strict moral code in the 1940s, it is no surprise that Hitchcock’s Roper isn’t an overt gay movie. Having said that though, it is undeniable that it can be watched and enjoyed by modern audiences as a movie that features two men who live together and treat each other very intimately…

Rope tells the story of Brandon and Philip, two educated New York elitists who conclude that due to their superior intellect and social position they can commit a ‘perfect murder’ as an experiment. They decide to strangle a former classmate and put his body in a chest in their living room, a chest that they later serve dinner off of to his friends and family, including an old teacher named Rupert (James Stewart). The film is shot in real time and is edited together in long 10-minute takes to resemble a stage play where the guests panic about the disappearance of David, ending with the eventual revelation about the murder.

The narrative is gripping enough without a consideration of the sexual politics of the film, yet there are some obvious clues as to the sexuality of the two hosts. They live together and holiday together; they finish each other’s lines and thoughts; they know all about each others favourite drinks, taste in music and constantly review each others feelings in relation to their macabre dinner party. They have a maid that seems to treat them as a pair of divas who are unable to fully look after themselves, and although Brandon has had a relationship with a female friend before – it seems to have ended badly (ahem).

Rupert, the professor with links to the hosts and the murder victim, seems to have inspired the young men with his ubermensch (superman) philosophy, which has led to the murder. An alternate reading of Rupert is that he is a sexual as well as educational role model; he represents a closeted schoolmaster from an all-male boarding school that has encouraged a blossoming sexuality in his students by teaching them of a world that is outside mainstream thought.

Overall Verdict: For a film that is over 60 years old it definitely grips the audience, and whether this is literally a ‘gay film’ or not it certainly contains a relationship that will be familiar to a gay audience.