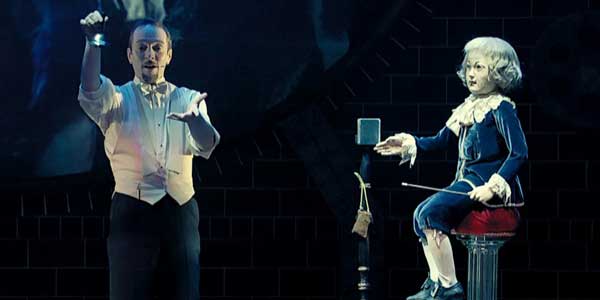 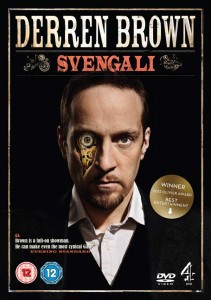 It’s certainly a show that would have been great to see live, with Derren interacting with the audience, guessing which of them made an anonymous confession, getting them up on stage to think of a famous face the illusionist then paints and various other things. Although it’s inevitable a show like this is going to lose something in the transition to the small screen, it’s still a very good watch.

It’s also very noticeable how much of Svengali’s success is down to Derren himself, as many of the ‘tricks’ feel familiar from previous shows – they’re presented very differently but the underlying principles are the same. However Brown is excellent at ensuring everything around each section of the show is entertaining and fun in its own right, so even if he’s using sleight of hand and techniques we’ve seen before, it doesn’t often feel repetitive. Even if you’ve watched everything he’s done, there are still a fair few things in Svengali that will leave you scratching your head as to how he achieved it.

As always Derren presents everything as being about the control of the mind, suggestion and mental skill, but you can never be sure how much of what he says is true and how much is misdirection, as there are plenty of times where you’re aware that you’re being led a merry dance with his narration. That’s not to say that everything is very simple flim-flam, as a lot of what he does is very clever and utterly bamboozling, it’s just that when he’s telling you how it’s done, it’s impossible to tell if he’s telling us the truth or not.

Undoubtedly the best part of the show is the automaton, Svengali, which is genuinely creepy when it ‘possesses’ a member of the audience. It’s very cleverly done, really hooks you in and whoever came up with the idea of using it deserves a lot of credit.

The only part I felt didn’t quite work was the conclusion, which involves balloons, blocks with numbers on, and a series of reveals suggesting Derren has known what was going to happen all along. It very well done and if you’ve never seen one of his live shows before you’ll be amazed and amused, but for those who’ve seen the likes of Enigma and Something Wicked Things Way comes, it’s the one time where it’s difficult not to feel you’ve seen all thins before in slightly different clothes. It’s still entertaining but its familiarity means it lacks the real sense of wonder and amazement – which with Derren is always as much about the cleverness of the idea as it is about the actual illusion – that some of his previous shows had.

Overall Verdict: An extremely entertaining show that’s funny and often baffling. There are moments where Derren’s fans may feel they’ve seen some of this before but it’s still very well presented and the automaton is brilliant.