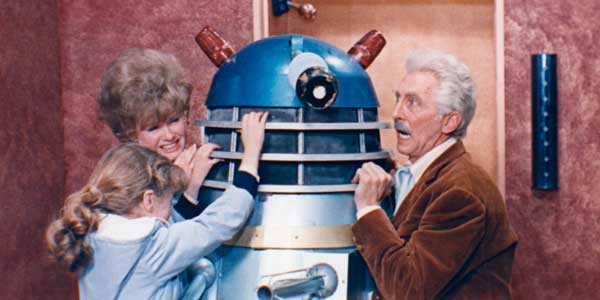 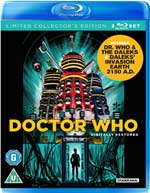 You could be forgiven for not knowing that in the 1960s there were two Doctor Who movies. The reason they’re slightly obscure is that they weren’t made by the BBC and aren’t considered part of the official canon – and for good reason. While they feature some familiar elements from the TV show, such as the Daleks and the police box TARDIS (in the movies it’s just TARDIS, not ‘the’ TARDIS), in other respects things are considerably changed.

For a start the titular Doctor isn’t an alien, he an eccentric human inventor, as played Peter Cushing, and Who is his surname. He has however managed to invent a time and space machine that’s bigger on the inside than the outside. In Dr. Who And The Daleks he invites Ian (Roy Castle) to take a look at TARDIS, which results in the guest accidentally transporting them to the planet Skaro, along with the Doctor’s granddaughters Barbara (Jennie Linden) and Susan (Roberta Tovey).

The planet initially looks deserted and has been badly irradiated. However they soon discover a city which is run by the malevolent Daleks, creatures that have hidden themselves away inside a metal shell in order to escape the radiation. There’s also another race on the planet, the Thraal. The Daleks want to wipe them out, but not until they’ve capture their enemies’ radiation battling medicine.

In the follow-up, Daleks’ Invasion Earth 2150 A.D., Susan and Ian get replaced by policeman Tom (Bernard Cribbins) and Louise (Jill Curzon), although little Susan is still along for the ride. This time they end up in London in 2150, where they discover the Daleks have taken over the planet. The Doctor and his companions must work out the Daleks evil endgame and put a stop to it.

The movies were made by Amicus (under a co-financing deal with Aaru) as a response to the popularity of Daleks on TV. They felt that audiences would flock to see the metal villains on the big screen, in colour and in widescreen. With the first film they were right, although the second proved less popular, particularly because it barely got a release in the US (the hope had been that having Cushing as the Doctor would make the movies popular over there). It’s a shame really, as the second is the better of the movies.

Both films also got a bit of a critical drubbing, and to be honest while the passage of time has given them a bit of retro charm, it hasn’t made them good films. Dr. Who And The Daleks in particular has a script that’s almost painfully cheesy at times, with faintly ridiculous plot developments and acting that’s less than stellar. It doesn’t help either that the people who did the Dalek effects didn’t realise their lights are supposed to pulse in time to their voices. The attempts to make that work in post-production resulted in oddly phrased and staccato speech (that may sound like how Daleks speak anyway, but it really is odd in the movie). It’s passably entertaining, but not a great film.

Daleks’ Invasion Earth 2150 A.D. is the better of the films, with a plot that’s comparatively well thought out, a few laughs and a fair amount of entertainment on offer. Things do get rather ridiculous at some points, but it’s a pretty fun movie. It’s also interesting that both films hark back to the Second World War, with the Daleks as the Nazis. In the first they’re master race obsessed nutters intent on wiping out their enemy, with the Doctor ending up as a rather unexpected warmonger, convincing the pacifist Thraal of the need to stand up to tyranny. The second sees Daleks setting up forced labour concentration camps, doing insidious experiments on their prisoners.

Both movies have been restored and looks okay on Blu-ray. They’re far from perfect, but it’s a big step up from the DVD and better than we might have expected for two mid-budget British movies from the 60s that haven’t exactly had a beloved history. The movies were also shot in Techniscope, a format that uses half the film of normal 35mm, so the quality of the image wasn’t necessarily amazing to start with. There’s still a little grain, but the audio has been extensively cleaned and the scratches and major blemishes removed from the pictures.

There’s a decent selection of features, the longest of which is an hour-long documentary called Dalekmania looking at the making of the movies. It’s worth a watch, as it has plenty of interesting info and an interview with Dalek creator Terry Nation. Each of the films also includes a documentary of the restorations. British film historian Gareth Owen and actor Bernard Cribbins provide commentaries, while Roberta Tovey and Jenny Linden are on hand for a commentary on Doctor Who And The Daleks.

You can buy the films either separately or as Limited Edition Collector’s set.

Overall Verdict: Neither of these Doctor Who movies is a masterpiece, but they do have a little cheesy retro charm. However they’re more suited to those intrigued by this piece of Whoviana than those expecting genuinely great films.