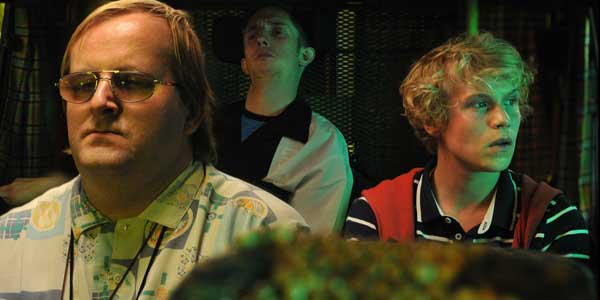 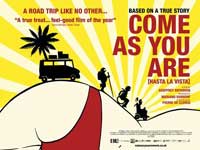 While there still aren’t a huge amount of films about disability, there are certainly more than there used to be. Just in the last year we’ve had the likes of Untouchable and The Sessions, and now a Belgian entry reaches British shores in the form of Come As You Are (Hasta La Vista).

The film follows young men Philip (Robrecht Vanden Thoren), who’s paralysed below the neck; Lars (Gilles De Schryver), whose brain tumour has resulted in him using a wheelchair; and the partially sighted Jozef (Tom Audenaert). While most of their lives consists of their families looking after and worrying about them, they decide to attempt a bit of independence and organise a secret holiday together. There’s one specific plan for this trip, to visit a Spanish brothel and lose their virginities.

After sneaking off without telling their families, they head over to meet the carer they’ve hired. However they are surprised that despite being called Claude, she’s actually a woman (Isabelle De Hertogh). Their stab at independence initially proves problematic, but soon things start improving. But will their families try to stop them before they get to their destination and will they ever actually lose their virginity? And with Lars’ cancer getting worse, should he even be going on a trip?

There are a couple of reasons film has generally steered clear of disability. The first is that they’ve been seen as commercial anathema – although that’s certainly been challenged, particularly by Untouchable, which grossed over $400 million around the world. The other main reason is the fear of getting it wrong. You want the audience to empathise with the characters without pitying them. You want the difficulties of disability to seem real without appearing to suggest their life is solely about adversity and what they can’t do. It’s this sort of thing that’s scared many filmmakers off, but which Geoffrey Enthoven decides to take on here.

He’s created a film that’s fairly entertaining and well-paced, but which does occasionally hit a bum note on tone. The film is careful not to paint its main characters as angelic paragons who battle adversity with stoicism. Instead it tries to make them fully rounded, so that there are times when they can be pretty objectionable – particularly Philip. Come As You Are also does a good job of developing the relationship between the boys and Claude, who has a bit of a murky past and might not be as shocked at the idea of them visiting a brothel as they initially presume.

However there are moments when it doesn’t quite work and dips into pitying its characters or turning their predicament into something manipulative. That’s particularly true of Lars, whose tumour from the beginning feels more like a plot device than anything else. That becomes increasingly true towards the end. However it’s a relatively small issue and some will feel the emotional edge it adds to the movie is worth the manipulation and edge of melodrama it adds.

Come As You Are certainly does have a fair amount to offer though. While the premise might sound like an American Pie or Inbetweeners style grossout-fest but with disabled characters, it’s certainly not that, but it does have plenty of humour and offers a few decent laughs. Most of the time it also feels like you’re being allowed to understand the main characters rather than the film using their different disabilities to manipulate your reaction (but there are moments when it can’t help itself).

It’s also good that the film doesn’t shy away from the lads’ sex drives, which is something that’s often ignored or shied away from with disabled people – indeed that’s part of the problem the boys have with their families, that in having to constantly care for them their parents have a tendency to infantilise them. As with The Sessions, Come As You Are confronts its characters’ desire for sex face-on, and while some may wish there wasn’t the vague whiff that it’s suggesting they could only get laid in a brothel (it does enough to ameliorate that sense by the end), it’s still good to have a film that says young disabled guys want the same things from a holiday as everyone else.

Overall Verdict: Despite moments when it feels like it’s getting the tone wrong, Come As You Are is an involving, sometimes funny film, that proves it’s not just able bodied boys who really want to lose their virginity.