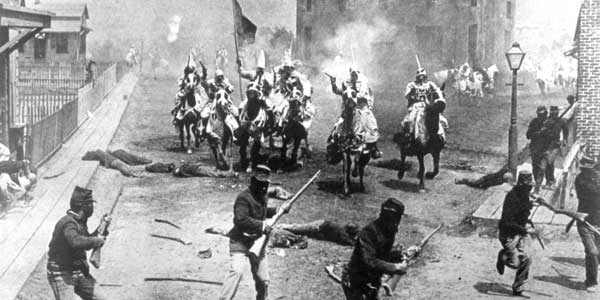 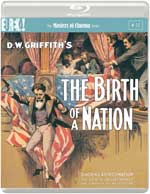 If ever there was a ‘difficult’ film, it’s Birth Of A Nation. The 1915 silent movie is massively important, changing cinema forever by creating the movie epic and hastening the move from short, one-reel films to feature length movies. Directed D.W. Griffith showed the scope and scale of what cinema could be in a way never seen before. In doing so he created the first monster hit, which played for a year (at live-theatre prices) in New York and was re-released pretty much every year for a couple of decades after that.

However it is horribly, horribly racist and no amount of lauding its importance to cinema can cover that up. Griffith was from the US south and was born shortly after the Civil War. He grew up being told tales of the Old South and so, somewhat understandably, had great sympathy for the devastation the wrought on the Confederate States during the War and afterwards. Along with that came a truly hideous racism that Griffith couldn’t even see as racism – he seemed to think it was just how things were.

He was apparently shocked and hurt when people said Birth Of A Nation was bigoted and even added title cards saying that the film doesn’t reflect on any race or people of 1915. However, he also included plenty of quotes from books as well as images that certainly sound like they’re saying black people as a whole are inferior, stupid and can’t see a white woman without trying to molest them. But no matter how surprised Griffiths claimed to be it’s one of the first title cards that tells you all you need to know about how this film looks at black people, as it says , ‘The bringing of the African to America planted the first seed of disunion’. Yep, it was their fault they were taken to the US as slaves.

The film details the run up to the Civil War, the conflict itself and then the period afterwards, concentrating on the Southern Stoneman family, as well as the major events, such as recreations of Robert E. Lee’s surrender to Ulysses S. Grant at Appomattox and the assassination of Abraham Lincoln. While it is about the big events, it concentrates on the freeing of the slaves and how Griffith viewed this as resulting in an attempt by Northeners to force the superior white Southerners under the heel of the malicious, lascivious, stupid heel of the black man.

In the world of Birth Of A Nation, the saviours of the pure, God-fearing whites comes in the form of the Ku Klux Klan, who put on their sheets and restore the natural order. At the time the movie was made, the Klan was long dead, but shortly after its release it was reborn, so it really does have a lot to answer for.

To modern eyes the film’s attitudes are absolutely deplorable. We’re used to old movies that were seen as shocking at the time becoming less so and getting a lower rating nowadays – for example most of the Universal monster movies of the 1930s now have a U certificate. Birth Of A Nation has gone the other way, as its racist attitude’s mean it now has a 15 certificate, and probably rightly so.

There is no doubt that the freeing of the slaves caused a huge amount of issues in the South, not helped by greedy, Northern carpetbaggers setting out to make things worse so they could cash in. However Birth Of A Nation bluntly presents the problem as stemming from what it sees as the almost idiotic idea that anyone could think black people could ever be thought of as equal to white people, because here they’re not – indeed they spend much of the film rudely thinking they shouldn’t have to do whatever white people tell them to and perhaps should have some control over their own fate.

If it weren’t so important, Birth Of A Nation would have sunk into embarrassed obscurity like many other racist movies from the early era of cinema. However it did change everything. More than any other film it’s where cinema as we know it began. Even now it’s impressive to look at, showing things on a surprisingly huge scale, with large battle scenes (cleverly staged as they weren’t actually as big on the set as they look on the screen) and an attitude that cinema was an artform as great as any other.

The film is making its Blu-ray debut, but for a couple of reasons don’t expect a pristine looking movie. For a start it’s nearly 100-years-old and so there’s inevitably been some degradation since then, not least because film stock in the early era of cinema simply wasn’t as good as we’re now used to. The movie’s popularity has also caused issues, as so many prints were struck from the original master that it was essentially destroyed. The result is that all that exists are copies of copies, and while this Blu-ray looks a hell of a lot better than most previous releases of the film, it’s not pristine. It doesn’t look bad though.

Those interested in the movie and Griffith will also enjoy the features, which include a decent ‘making of…’ featurette that features a lot of interesting info, even if it is a little too pardoning of Birth Of A Nation’s racist attitudes. There are seven Civil War one-reel shorts Griffith made before Birth Of A Nation, which were almost like practice for his massive epic. Also included are some interesting titbits, such as a 1930 re-release title sequence lauding the movie as the greatest ever made; the original intermission sequence; and a short re-release introduction featuring Griffiths and Walter Huston talking about the movie in the early 30s.

Despite the fact it had been controversial since the day it was released, Griffiths is still surprisingly defensive of the film and its attitudes even in the 1930s, seemingly incapable of seeing that many of the problems between blacks and whites after the Civil War were a result of slavery and the conflict itself, not because black people are inherently inferior. That blindness is backed up in the booklet included with the Blu-ray, which includes articles by Griffith and Thomas F Dixon (who wrote the novel The Clansman, which Birth Of A Nation is based on) where they express opinions that nowadays it seems almost unbelievable anybody could ever have held, but they’re saying things that the majority of white people believed at the time.

However, there is some value in all this racism, as while we all know the past was more openly racist than things are today, it’s rare to be able to see that in action and not just talked about or recreated afterwards. It’s undoubtedly educational to be presented with something like this, which while protested by some even in 1915, was seen as acceptable and reasonable enough that it became by far the biggest hit cinema had seen up until that point. Millions of people watched this and thought it was just fine, which really does underline how prevalent racism was, and indeed that at the time most people wouldn’t have even have thought of it as racist.

Birth Of A Nation is an important document to remind us that we must always question the status quo, as just because the masses may think something is ok at any given point in time – whether racism, sexism, homophobia or indeed many other things – it doesn’t mean it is. It’s a reminder that we should always question our own attitudes. After all, in 100 years’ time, we don’t want people decrying our terrible attitudes.

Overall Verdict: If you’re a true fan of cinema, Birth Of A Nation is an impressively made film you ought to see, as it is undeniably vastly important. It’s just a great relief that it’s the movie’s cinematic attributes that were so influential and helped give birth to the US film industry and not its horrifically racist attitudes.