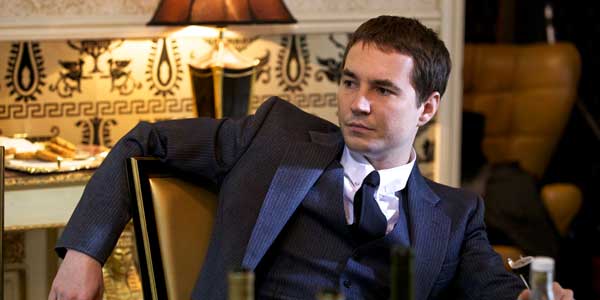 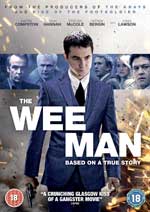 Listen up you fuckers, the fucking movie The Wee Man is fucking coming to DVD. It’s full of Scottish gangster fuckers, killing and fucking murdering and swearing all the fucking time.

If you’re shocked by those two sentences, this is not the movie for you, as without very strong swear words this film would be about half as long as it is. Indeed you can probably tell how good or bad a character is by how many f-words and c-words are used before and after their names by other characters.

It tells the ‘true’ story of Glaswegian gangster Paul Ferris. The word ‘true’ goes in inverted commas as the movie has already been taken to task by many for not being all that true. Ferris is now supposedly reformed – although many in the Scottish police are convinced he’s still involved in crime – and has made a mint writing books about his life as a gangster. Many have suggested those tomes are self-aggrandising and full of half-truths, which try to paint him as something other than the thug he was. This film has even less relation to reality than those books. Admittedly when dealing with gangsters, sorting the truth from fiction is always going to be tough, but even with verifiable fact the movie has shifted things around a lot. At one point Ferris is seen avenging a recent murder, even though in real life the person died when Paul was three.

The Wee Man is worse than many, as it really does seem to be in awe of Ferris, excusing his actions and treating him as if he’s noble but slightly misguided. It even literally cheers when he gets off a murder charge (even though he almost definitely did it). It uses the cheapest of cheap pop psychology, with Ferris’ descent into gangster life presented as a reaction to him being bullied as a child. Likewise the man who becomes his nemesis, Fat Boy Thompson, is motivated by the fact he doesn’t think his daddy loves him enough.

The film starts with a young Ferris (Martin Compston) feeling weak and bullied until he can’t take it anymore. He snaps and stabs two of the brothers who’ve been making his life hell. He then becomes part of the gangster underbelly of Glasgow, believing that there’s some sort of code of honour to what they do, and soon rising to be an indispensable part of Arthur Thompson’s (Patrick Bergin) criminal underworld.

Arthur’s son, Fat Boy, can’t help but notice this and begins to plot against both Paul, as well as scheming to replace his own father as the leader of the firm. However as Fat Boy snorts increasing amount of cocaine and shows an increasingly brutal side, Paul realises one of them has to go.

Martin Compston puts in a strong performance in the lead role and holds the film together. He almost makes you forget that there’s something rather distasteful about this film, which in its easy answers, filmic plot developments and lauding of gangsters often feels like it’s trivialising some very real, terrible events. Indeed, family members of some of those killed in the film have spoken out against Wee Man, largely because they too have a problem with Ferris’ creation of his own myth.

If you like modern British gangster films and having a sneaking admiration for organised crime, you’ll probably like this, as it’s a fairly good example of the genre. However that does mean you have to overlook how it lionises criminal scum and excuses some pretty despicable acts with pop psychology and cheap plot turns that always allow Ferris to come out smelling of roses.

The best gangster movies manage to explain gangster life, treat its subjects as human and be entertaining while never forgetting that these are unpleasant people doing horrible things – it’s one of the reasons Scorsese’s gangster movies are so beloved. Sadly though the latest rash of British gangster flicks treat these people as heroes and constantly find reasons why what they did is okay, while they upholding an almost nostalgic code that the rest of the world has forgotten. The Wee Man is guiltier of that than most, constantly apologising and excusing its main character’s action, while revelling in horrible violence. It left a bad taste in my mouth, but if you’ve liked other recent British gangster movie, you’ll probably like it.