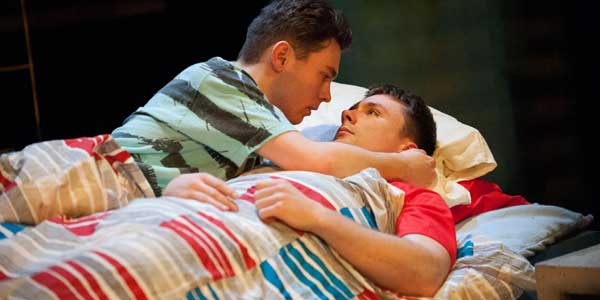 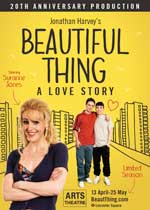 It’s always a bit odd when you first watch a filmed recording of a stage production. Initially it’s difficult to escape the feeling you’re watching it in the wrong medium. However if done well you quickly forget that what you’re watching was designed for a theatre setting and can just enjoy the show. Thankfully that’s very true of this filmed version of the 20th Anniversary Production of Jonathan Harvey’s Beautiful Thing.

It was shot over two nights in May this year at The Arts Theatre in London, and is now available for online viewing & download via Digital Theatre.

Harvey wrote Beautiful Thing when he was just 24 and it put his name on the map, leading to the sitcom Gimme Gimme Gimme, various other plays, the Pet Shop Boys musical Closer To Heaven and more recently work on Coronation Street. However it’s probably Beautiful Thing that he’s best remembered for and watching this you can understand why, as 20 years after it was first performed, the heart of what he wrote is as true and powerful as ever.

Mainly set on the landing outside three flats in London’s Thamesmead housing estate, Beautiful Thing follows teenager Jamie (Jake Davies), who lives with his mum, Sandra (Suranne Jones). She’s a brassy woman who loves her son and is constantly trying to get him to take sports classes even though he has no interest. On one side of them lives the Mama Cass obsessed Leah (Zaraah Abrahams), a mouthy young lady not afraid to say what she thinks. On the other side is Ste (Danny-Boy Hatchard), a lad about Jamie’s age who lives in fear of his violent brother and father.

After a particularly vicious beating, Ste takes shelter in Sandra’s flat. She thinks nothing of getting him to share a bed with Jamie. This ends up being the start of a romance between the two lads, who deal with their burgeoning sexual identities and attempt to find their way to love.

The synopsis perhaps suggests that as it touches on some dark and difficult themes, Beautiful Thing will be a rather depressing slog towards romance, but what’s always set the play apart is how funny it is. It constantly manages to find the humour in life, with characters who know what it is to get by on very little and therefore are used to seeing the humour in difficult situations. It’s also surprisingly sweet, romantic and there are moments when you can cut the sexual tension with a knife.

The cast do a great job with the material. Suranne Jones shows once more that she’s far more than Karen McDonald off Coronation Street with a commanding performance as Sandra. While the play is about Ste and Jamie, it’s Sandra who’s the character that holds everything together and if you don’t have the right person playing her the play isn’t going to work. Jones handles it with aplomb. Jake Davies and Danny-Boy Hatchard (making his professional debut) are also extremely good as the boys, really making you invest in them and their relationship. Zaraah Abrahams and Oliver Farnsworth offer strong support as Leah and Sandra’s slumming-it boyfriend Tony.

Some films of stage productions suffer because they’ve only used a couple of cameras, and the whole thing has felt locked off and far away from the action. However here things are far more dynamic, taking you into the thick of things with direction that’s well thought out to ensure you’re always shown the right things in the right way. Although the decision to have the move in for the boys first kiss in slow motion pushes things a little too far, the filming is largely done in a way that respects the fact it’s a stage production while also making it filmic enough to make it good viewing in the home.

Beautiful Thing already became an excellent film in 1996 and this new version underlines how good the script is. There may be a few lines that date it, with references that won’t mean much to people who can’t remember the early 90s that well (but cause plenty of laughs for those who do), but these are only a minor part of what is a timeless gay story, full of emotions and moments that will be familiar and affecting to many. With good actors, direction and Harvey’s great script, this is well worth taking a look at.

Overall Verdict: Beautiful Thing is still one of the best coming out stories, and this new production is a great take on the material, bringing out the humour and emotion of the tale.