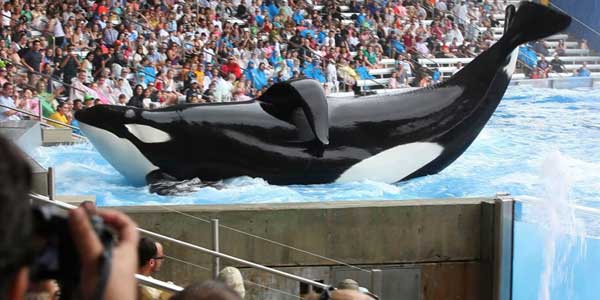 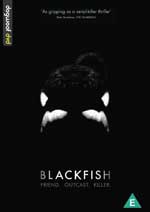 Since the 1960s millions of people have gone to the various SeaWorld parks in the US, many drawn by the opportunity to see killer whales up close in the famed Shamu shows. Blackfish takes a close look at the parks and its animals, mainly focussing on the largest killer whale in captivity, Tilikum, who’s been implicated in the deaths of three people.

Using interviews with former trainers and various others, the documentary tells Tilikum’s story, surrounding this plenty of footage and other info that questions whether SeaWorld puts profits before the safety of its staff and even whether it’s right to keep these animals in captivity at all.

Tilikum was born in the wild but separated from his pod at a young age and taken to the Sealand Of The Pacific park in 1983. He was kept there with two females that constantly harassed, with the animals spending most of their life in the dark in an tiny pool. The park closed shortly after a trainer was killed in 1992, with eyewitnesses suggesting that Tilikum was responsible.

Despite this, SeaWorld was keen to buy Tilikum, impressed by his immense size and potential for breeding. The whale was moved to SeaWorld Orlando, where trainers were apparently told he had nothing to do with the death at his previous home, despite evidence otherwise. In 1999 he was found one morning with the dead body of a man draped over his back. While the official story was that the man had snuck into the park and died of hypothermia, the autopsy showed he was covered in bite marks and parts of him had been mutilated.

It was in 2010 that Tilikum really hit the headlines after dragging trainer Dawn Brancheau into the pool and killing her. Tilikum’s tale is interspersed with information various incidents (and deaths) involving other SeaWorld killer whales, suggesting it’s not just a case of one rogue creature.

Sometimes with documentaries you have to be careful that you’re not just being pulled in by a piece of propaganda. While Blackfish is certainly one-sided, it’s very convincing in its questioning of the entire idea of keeping killer whales in captivity, and that if we do, that SeaWorld’s way isn’t the way to do it (despite the millions they’ve spent convincing the world they’re at the forefront of marine mammal research and husbandry). Indeed, the documentary is fairly convincing that the parks will do pretty much anything to make it seems like there are no problems with keeping whales in park. That’s even if that means essentially lying about how old the animals live to, how many have dorsal fins that have collapsed and blaming trainers for incidents that actually seems to be aggression on the part of the whales.

It’s a powerful, angry film that suggests that what parks like SeaWorld do to whales isn’t simply a health and safety hazard to their trainers, but also causes immense mental suffering and perhaps psychosis amongst the animals.

Overall Verdict: Blackfish is a well-made and always engrossing indictment of SeaWorld’s treatment of both its whales and the people who look after them. It’s not just for animal activists, it’s for anyone interested the dangers of when animals and profits collide.