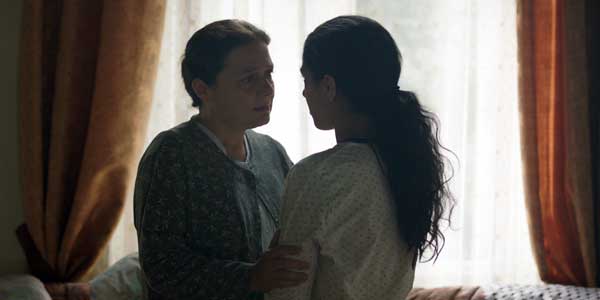 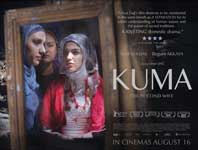 Ayse is young woman living in a small village in Turkey whose family has decided to marry her off to the handsome Hasan. However the arrangement is actually a way to get around polygamy laws, as Ayse is really going to move to Austria and become the second wife of Hasan’s father. Ayse is welcomed into the family by first wife Fatma, who has cancer and sees this new woman as the way her family will continue if the worst happens. Perhaps unsurprisingly some of the children, who’ve all grown up in the west, are unimpressed by this ‘bumpkin’ interloper.

Just as Ayse begins to find her place in the family, an unexpected event throws the family into turmoil. Ayse’s position suddenly becomes precarious, especially after she learns why her legal husband, Hasan, agreed to marry her in the first place. With her life seemingly in the hands of others, her decision to secretly follow her own feelings could have disastrous results.

Occasionally a film takes you by surprise. On paper Kuma comes across as one of the endless parade or well-intentioned arthouse flicks that’s small, contained, and more interested in impressing itself than the viewer. Indeed, I can imagine some people’s eyes glazing over just from the plot description. However, thanks to a strong, careful script, very good acting and a pace that’s slow enough to draw you into the characters but not so glacial it gets boring, it’s a surprisingly engaging and involving watch.

Initially Ayse seems like she could be the film’s undoing, as she’s so ridiculously nice, self-sacrificing and patient that she comes across as a bit of a cipher. However as the film progresses that character comes into herself, showing that there is more to her than almost otherworldly acceptance. She ends up making a great counterpoint to the strong, rather passive-aggressive Fatma, who is a good woman although rather blinkered by both tradition and what she thinks her family ought to be.

There are an increasing number of movies about the immigrant experience, often made by directors who want to explore the challenges they’ve faced growing up in the west when their parents came from a very different culture. That seems true of Umat Dag, who makes his feature debut with Kuma.

The film does cover some increasingly well-worn ground, such as the idea that some immigrants are so keen to stick to their own culture that they become even stricter about it than the people in their home country. It also touches on children who are somewhat stuck between the world of their parents and that of the country they live in (which also gives the movie a bit of LGBT interest). However what helps raise the movie above the ordinary is the complexity and nuance it brings to this look at culture clash, and how in trying to preserve traditional ideas, you can easily end up with a family that is as eclectic and idiosyncratic (if not more-so) as those who follow a more modern western lifestyle.

There are a few issues with Kuma, but nothing too bad. The movie has a tendency to be rather episodic, which at times gives the impression there are things we should have seen but didn’t (indeed I wondered if quite a lot more was filmed but ended up on the cutting room floor). The ending is also a little histrionic, but it feels true to the characters even if several things are left hanging (which seems to be intentional).

Overall Verdict: Kuma may not be the sort of the movie that’s packed with action, but with a smart script, good acting and a great eye for the nuance of families (particularly that of immigrants and their children), it’s a more involving and entertaining movie than it may at first look.