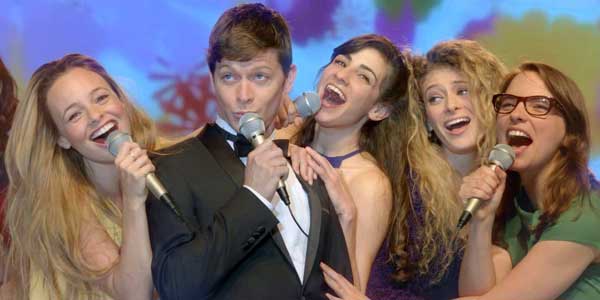 A group of friends in Tel Aviv, Israel, watch Eurosong (a show similar to yet legally distinct from Eurovision) together. Each dealing with their own problems and despairing of the manufactured soulless feeling of their country’s entry, they laughingly create their own more authentic ditty. As a bit of fun, one of the friends sends it to the judges and, to their surprise, it becomes Israel’s official entry the following year.

Each character has a story that unfolds as the big day draws near; the troubled housewife, the flamboyant teacher, repressed Minister’s aide, socially awkward blogger, frustrated executive and the under-appreciated musician. Think Love, Actually with a bit more camp and you’re not far off.

Taking a gentle swipe at the creative conveyor belt and the PR machine that goes with pop music, this is a story about friendship, taking a chance on something exciting and sticking together. And includes a song that’ll be stuck in your head for days, even if you can’t pronounce the words.

The narrative isn’t particularly twisty or suspenseful, but it never feels boring, or anything less than sprightly and fun. While the plot bounces along, it strikes a delicate balance: avoiding becoming too bogged down in the subtleties of each relationship without skipping over anything important or leaving a character underdeveloped. The viewer is left with a story that is satisfyingly complete in itself; sweet but not sickly; a charming and cheeky treat.

A long way from Yossi, director Eytan Fox’s last Iris outing, Cupcakes is a vibrant, gorgeous film –perhaps a little idealistic; the primary school teacher in drag singing and dancing while teaching his class for example, is sweet but probably not particularly realistic. Visually enchanting, giving each character’s world a distinctive colour that’s expressed through the décor of their home (lovely if slightly impractical-seeming sets), their clothes (stylish, even down to the tuxedo-and-tutu ensemble) and other clever little touches throughout.

Overall Verdict: Sweet, a little fluffy, but perfectly turned out.