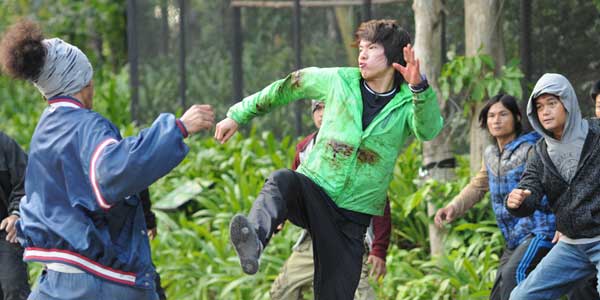 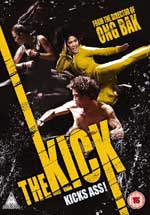 After foiling a robbery, a family of Tae Kwon Do athletes are forced to go into hiding. But when the youngest is kidnapped by the thieves, they are forced to commit the crime themselves to save him.

Some films can be challenging to watch. They could be simply too scary, require too much grey matter, or be so awful in every way you have to bring your own fun to the experience. No prizes for guessing where The Kick fits in.

With jazzy music and obvious clichés directly lifted from Kung Fu Hustle, The Kick is unfortunately devoid of any of the irony and panache which made Stephen Chow’s martial arts bonanza so entertaining.

The am-dram acting, technically sloppy editing, and home-video cinematography ensures that you never truly engage with the cardboard thin characters. The audience is utterly detached from the drama on screen: you simply do not care what is happening to the family.

Attempts at comedy consistently fall flat. You cannot even laugh at how bad the film is. The violence borders on grim, making it unsuitable for kids. The peak of this is the violence by the parents on the children in yet another attempt to lift from Kung Fu Hustle. While KFH has a wacky feel that makes the violence funny, The Kick’s version is simply child abuse. Further down the line, its attempt at a ‘deep spiritual lesson/wisdom’ can be boiled down to ‘finding the courage to jump off a waterfall’. Really.

With no real story, repetitive fights, lazy script, and jarring stock music, there is nothing to like here. The martial arts are mediocre, making Tae Kwon Do look boring. There is some Muay Thai thrown in, but if you expect anything like Ong Bak, you will be sorely disappointed.

Overall verdict: Despite being directed by Ong Bak’s Pinkaew and shamelessly stealing from Kung Fu Hustle, fans of both films will probably not enjoy The Kick. You’d be hard pressed to find anybody who does.