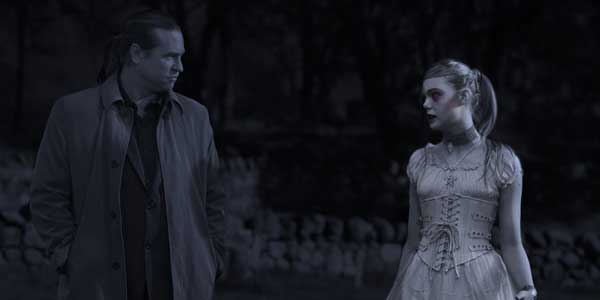 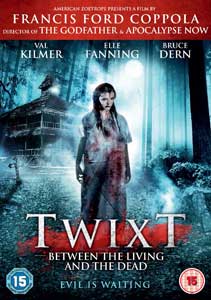 Val Kilmer plays Hall Baltimore, a struggling writer who arrives in a strange town that we’re told is a peculiar place where evil may lurk. As Hall attempts to write a book, he gets sucked into an old murder mystery, which spans both everything from possible vampires and a seeming dream-world to a ghost called V and being visited by Edgar Allan Poe.

It’s an odd movie that gets increasingly peculiar as it goes along. There is method in its madness though and the DVD cover slugline, ‘Between life and death’, should give you a hint as to where it’s going. The film plays with ideas, such as whether a writer really just writes his own story over and over, as well as trying to create an atmosphere that’s like a Poe tale – ethereal and yet grounded in emotion.

Twixt actually does a far better job at creating a Poe-like atmosphere than most attempts to do a straight adaptation of one of the great writer’s tale, and it certainly keeps you intrigued as you try to figure out what’s going on. Unfortunately the ending isn’t that great, and there’s often a sense the movie works better as an exercise in creating atmosphere and playing with ideas than creating a something that works as an overall experience – and it’s for that reason it feels like the work of a newbie filmmaker. That’s not to criticise Coppola, as it’s great he’s still experimenting, but while he’s created something very intriguing with Twixt, it’s a shame it doesn’t come together a bit better.

Overall Verdict: Strange and intriguing, Twixt does a good job of pulling you into its worlds that are halfway between reality and madness, but it ends up being more interesting that truly satisfying.