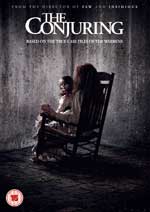 James Wan has been proving that idea with the likes of Saw and Insidious, and it’s certainly true with The Conjuring. It may be a pretty typical haunted house story, but it delivers on the entertainment and jolts.

Set in the early 70s, the movie follows Ed Warren (Patrick Wilson) and his wife Lorraine (Vera Farmiga), who are paranormal investigators specialising in demonology. They’re brought in to help the Perron family, who seem to be living in a house that’s haunted by something terrible. Once the Warrens are there, the entity begins to feel threatened and the supernatural shenanigans get worse. The secrets of the house’s past are uncovered and the Warrens may have to face their toughest challenge yet.

Like so many modern horror movies it’s supposedly based on a true story, although I’d be willing to bet it takes more than a few liberties. It’s a film that doesn’t offer much that you won’t have seen before, but what’s there is extremely well done. The likes of Patrick Wilson, Vera Farmiga, Lil Taylor and Ron Livingstone take it seriously enough that you’re pulled in, without going so far that it starts seemingly ridiculously po-faced.

James Wan meanwhile shows he knows how to tell a well-paced story and that if a sequence calls for tension and a few jumps, he knows exactly what to do there too. There are a few absolutely excellent sequences where objectively not a lot happens, but you’ll be on the edge of your seat anyway. And it manages to do all that without needing endless amounts of blood, guts and gore.

It’s also worth pointing out the set design, which may make the house look a little grottier than most people would want to live in, but it’s cleverly designed to enhance the sense that anything could be lurking in the dark corners.

Overall Verdict: This is one of those films where there’s not a huge amount to say. The plot is a pretty basic haunted house flick, but it’s one that knows what it’s doing, delivering on the tension, jolts and entertainment.