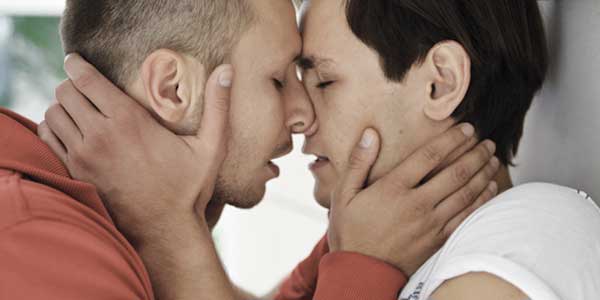 Poland has absolutely no history of gay-themed cinema, but this year has seen the arrival of two acclaimed movies from the country, In The Name Of and now Floating Skyscrapers. The latter initially sold itself as Poland’s first LGBT movie, but it was actually beaten into film festivals by In The Name Of by a few weeks.

Floating Skyscrapers follows Kuba, who lives for swimming and hopes to become a champion. He has a girlfriend he lives with and a slightly overbearing mother. His life is slightly stuck in one place until he meets Michal. The two embark on a relationship, which challenges Kuba’s ideas about himself and his future. His swimming begins to suffer and inevitably his secret relationship affects the one he has with his girlfriend – however she isn’t going to let him go easily, even when he’s finally ready to accept who he really is.

Tomasz Wasilewski’s movie is quiet and nuanced. There’s not an awful lot of dialogue, with the director instead creating the drama and emotion via gesture and filmmaking technique. It’s a movie that’s fascinated by the interactions and motivations people have, as well as how love can often involve imbalances that people are constantly striving to iron out, even it’s to the detriments of the other person involved.

Mateusz Banasiuk is excellent as the troubled Kuba, who starts the film knowing that he likes men, but goes on a journey to connect the emotional side to the sexual, as well as to realise that this is something he can have in his life, not just something that has to be furtive and hidden behind toilet cubicle doors. It doesn’t hide the fact that being gay isn’t easy in Poland, which highlights the reasons why Kuba has such trouble coming to terms with it, and how other people want to force him in certain directions, irrespective of what he thinks about it.

It’s an often tense, occasionally sexy and somewhat sad film, which slowly unfurls and explores rather than driving forward as many movie do. It’s a decent film, although there is the slight sense that we’ve been here before. Many of the issues it explores are a little old hat in the English-speaking world, talking about things that aren’t as prevalent in the US and UK as they once were.

Of course these pressures are still very much alive in Poland, and as this is a movie made from the inside it does have a tendency to look at things in a way that many gay-themed British and American films did 10-15 years ago.

It’s not a fatal flaw and indeed it does add an interesting edge, highlighting how similar people’s reactions are to the situations they face no matter where they’re from, even if the specific pressures change over time. It’s somewhat thought-provoking as an insight into LGBT issues in Poland, although it mainly reveals that things aren’t so different as they might first appear.

Overall Verdict: The location and filmmaking techniques hold your interest, but the plot of Floating Skyscrapers is a bit of a well-worn tale.