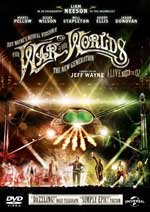 In the 1970s unusual albums were the flavour of the times, from The Who’s Tommy to the surprise success of Tubular Bells. However when Jeff Wayne released his musical version of HG Wells’ War Of The Worlds in 1978, I’d be surprised if he thought that 36 years later it would still be going strong re-envisioned as an arena spectacular. Many people mistakenly think it started out as a stage musical, but it wasn’t it was a concept album, with the voice of Richard Burton and various people singing the songs.

It took more than 25 years for the album to go live, with a giant holographic Burton head, orchestra and singers. As with the original album, it proved far more popular than many had expected, selling out arena shows and gaining a new legion of devoted fans. Its success has led to this new iteration, which expands the story a little, as well as replacing the iconic Burton with Liam Neeson, who even manages to turn on up on stage life-size via holographic technology.

The story is as you would expect – Martians comes to Earth and begin to take over, with humans trying to deal with suddenly losing control of the planet. All this is narrated by a British journalist who talks about what he sees of the war, including the massive Martian tripod war machines. Neeson is the journalist in this live stage version, and he also gets ‘sung thoughts’ courtesy of Marti Pellow, with other musical roles going to the likes of Jason Donovan and Kaiser Chiefs frontman Ricky Wilson.

Jeff Wayne’s War Of The Worlds is the sort of thing that should never have worked even back in 1978, and the fact it’s still around now is incredible. Its trick, if that’s the right word, is that while it’s very much a product of its time,the hooks are infectious and the songs memorable. It’s one of those pieces where once you’ve heard the tunes, you’ll remember them forever. It’s surprisingly entertaining, even if it is somewhere inbetween a musical and a staged concert.

The technology helps, with both a giant holographic Neeson head and a life-size onstage version, along with a 100ft long video wall and an enormous Martian tripod that comes down onto the stage. It really is a bit of a live spectacular, with Jeff Wayne there too conducting the orchestra. However the way it’s filmed sometimes doesn’t help, particularly when Neeson turns up onstage. The idea is that he can be part of the action, with the hologram making it seems like he’s really there, but it often doesn’t really feel like that because of how it’s shot, which either reveals the flat nature of the hologram or fail sto make the live characters feel like they’re interacting with Neeson.

It’s annoying as it’s clear that filmed in a different way it could have worked a lot better. Nevertheless you still get the sense of what it would have been like live.

To enjoy this you undoubtedly have to like Jeff Wayne’s War Of The Worlds, and while some fans will miss Richard Burton, most will probably feel Neeson is a successful replacement, with the right sense of gravitas and a surprising closeness to Burton, despite the Irish lilt.

Overall Verdict: A great new staging of War Of The Worlds, which is very entertaining even if it’s as perplexing today that it works as it was the day Jeff Wayne’s concept album was first released. It just would have been nice if they could have worked out how to film the holograms a little better.