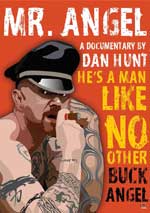 It’s an interesting film with a fascinating subject, helped by the fact that Buck is passionate and engaging. It brings up all sorts of interesting issues about how Buck and the way he lives his life has been important and challenged the status quo.

The film doesn’t really get to grips with this, partly because it’s something Buck doesn’t really differentiate about. For example, in the documentary he objects to the fact that on Tyra Banks’ talk show he was referred to as a ‘sexual oddity’. He thinks that’s wrong as he’s just normal. However, while the Tyra Banks show’s terminology is rather crass, Angel is unusual, physiologically at least, even if every other respect he’s perfectly normal. If he wasn’t, he wouldn’t have a documentary made about him or have been invited on a chat show. Unfortunately the documentary doesn’t really look at this properly – even if it hangs in the background much of the time. Hell, even the front of the DVD cover refers to him as a ‘man like no other’.

Even so, he’s a surprisingly inspirational figure and the passion he has for his advocacy work is infectious. The documentary is well worth watching, even if it’s difficult at the end not to feel it’s missed some of the story. Buck certainly is just a normal guy, but it’s difficult to deny that (just like most people) there are some ways he’s not typical at all, and indeed his career is dependent on that – so trying to brush over this doesn’t really do the film any favours. After all, there are different types of normal and there’s nothing wrong with that, but Mr. Angel doesn’t really want to deal with the nuances, despite the fact they appear to be important to Buck’s story.

Overall Verdict: Mr. Angel is an interesting documentary about an interesting man, however it fails to deal with some of its key issues, partly because it’s so much on Buck’s side it doesn’t even want to properly deal with or argue against possible criticisms of him.