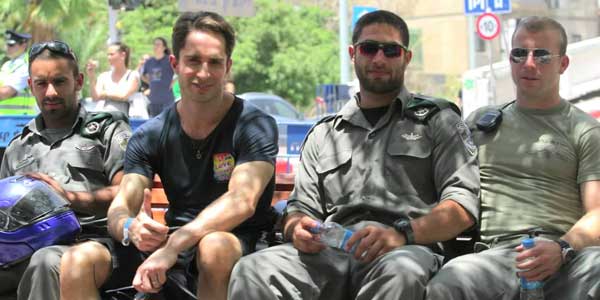 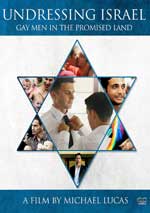 The documentary’s assumption is that hardly anyone knows anything about Israel and will therefore be surprised to discover that not only is homosexuality legal in this middle-eastern country, but it’s home to a vibrant LGBT scene, where gay partnerships are legally recognised. As you can probably already surmise, that premise is fine if you think everyone in Israel rides camels and that being gay is a crime there, but if you’re even vaguely aware that Israel is not trapped in the 16th Century, it becomes rather less interesting.

There’s undoubtedly a side of Undressing Israel that feels like an extended advert for the Tel Aviv Tourist Board. On that score it works well, as it makes the city look like a vibrant, extremely gay-friendly place, with a thriving LGBT scene, but unless the fact that Israel is relatively gay-friendly is genuinely news to you, Undressing Israel doesn’t have a huge amount to say you won’t already be aware of.

It’s a shame really, as with a bit more context it could have been so much more. While it gives you the dates certain things happened in Israel, such as the decriminalisation of homosexuality and when gay people were allowed to serve openly in the military, there’s not much talk about how or why these things occured. It’s also keen to paint a universally positive picture, so it rather papers over any problems gay Israelis and Palestinians may face – it doesn’t completely ignore them, but there’s no doubt it treats them as pretty minor. It also suggests that all of Israel is as LGBT friendly as Tel Aviv, with only occasional hints that this may not be totally true.

Lucas’ flag-waving approach is understandable considering he’s part of a battle against anti-Israeli sentiment, but he’s missed a trick, as a more rounded look at how Israel became such a progressive country on the LGBT front – which it did remarkably quickly – as well as how it’s facing the challenges it still has, would have been more interesting and just as pro-Israeli.

But then, I suppose I’m not really the target audience. I was already aware Israel was pretty advanced on gay rights, so Undressing Israel didn’t tell me much I didn’t already know. Perhaps it is worthwhile for those who know nothing about the country, but even for them it’s often a little too much like a holiday guide to be completely successful.

It’s also worth noting that while the documentary itself is fairly short, the DVD comes with a decent selection of bonus features, which add to the package.

Overall Verdict: Undressing Israel sets out to challenge stereotypes about gay right in Israel, but does so in a rather basic way, coming across as much as an advert for Tel Aviv as a documentary.