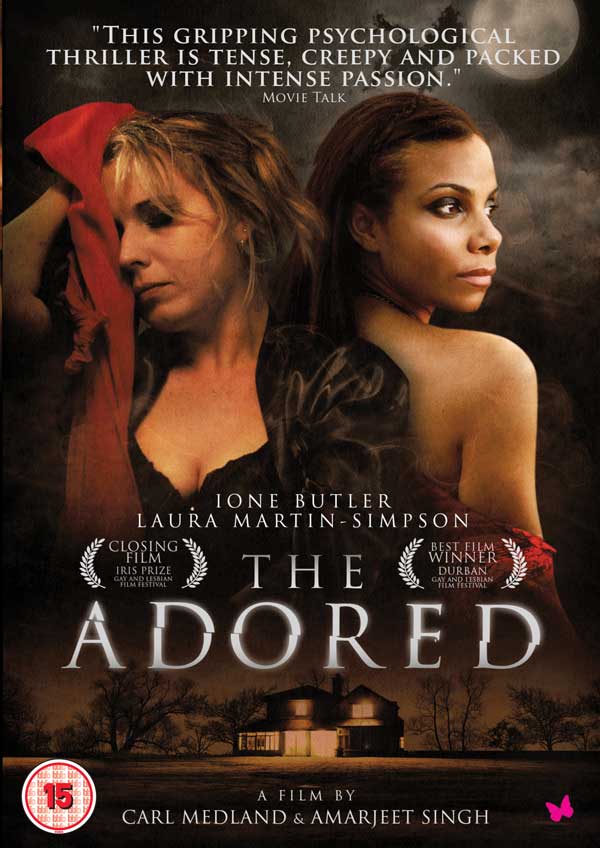 Maia (Ione Butler) is a model who’s lost her confidence and has been having a difficult time in her personal life. A photo shoot in the Welsh countryside with photographer Francesca (Laura Martin-Simpson) offers her the chance to get away and have a little fun for the weekend. However what should have been a simple girly weekend begins to take on an ominous tone as Francesca embarks on a long, slow seduction of Maia that seems to have an unhealthy intensity and intrusiveness. Maia also can’t shake the feeling there’s someone else hanging around and spying on them.

This is intercut with Adrian (Jake Maskall), who’s recently done something violent that’s meant he’s being made to talk through his problems with his wife with Doctor Woods (Caroline Burns Cook). However initially it’s not clear how what Adrian is talking about relates to Maia and Francesca.

The Adored is a psychological thriller that goes for the slow burn. Indeed initially it’s a bit of a glacial burn as it perhaps takes a little too long setting things up. However about halfway through things start to pick up and a sense of unease begins to kick in. Maia is vulnerable and reeling from personal traumas while Francesca starts to appear increasingly dangerous, especially if she doesn’t get what she wants. Initially Maia’s resistance to Francesca’s advances seem to be protecting her, but as the model’s defences break down she’s in an increasingly precarious position.

The movie ensures you’re never entirely sure what’s going on and exactly how much danger any of the characters are in. That’s particularly true with Adrian, as we don’t know who he is or how he’s related to the women. We also don’t know when his part of the story is set. Is it taking place at the same time as the main events? Is it before? Is it afterwards? Indeed, by the end you may be wondering how real he actually is.

The fact The Adored is so keen on keeping you guessing does cause a few small problems. Certain issues are left completely unresolved and only seem to be thrown in to act as red herrings that don’t really make a massive amount of sense. A couple of these thing have the potential of undermining the main thrust of the story if you think about them too much, but luckily they’re not lingered on for too long so it’s easy not to let them ruin your enjoyment, even if some things are left a little too open at the end.

It’s certainly not a bad British psychological thriller, especially after it gets past the slow start. Some may wonder if it’s playing on lesbian stereotypes of being obsessively in love with someone after meeting them for five seconds, but it largely handles the LGBT side of its equation pretty well, including generally avoiding the idea that lesbians only get together for the eyeballs of straight men. It may not be perfect, but it’s not a bad movie.

Overall Verdict: After taking a little too long setting things up, The Adored starts to increase the tension and get you wondering exactly how much danger the characters are in. It’s worth a look if you’re in the mood for an LGBT-themed psycho-thriller.