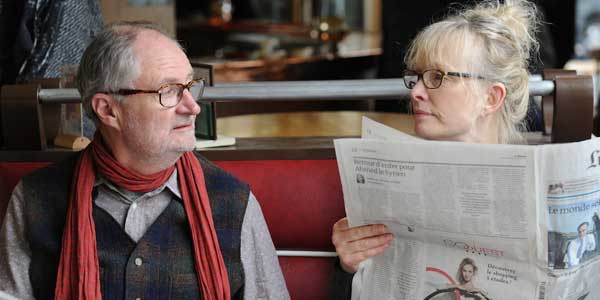 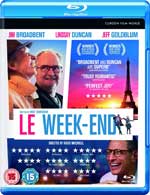 Nick (Jim Broadbent) and Meg (Lindsay Duncan) head to Paris for their 30th wedding anniversary. However Nick’s romantic gesture soon begins to head off course when Meg wants to upgrade to a more expensive suite. As the weekend continues, the problems between the couple become increasingly apparent, with Nick pondering his future after he’s been forced to retire from the university he works at, while Meg isn’t sure whether she even wants to stay married now that the children have left.

The couple sway between attempts at romance and increasingly harsh bickering. When they bump into Nick’s old college friend Morgan (Jeff Goldblum), it throws into relief the differences between the people the couple once aspired to be and who they are now.

It’s often said that they don’t make movies about middle-aged/older people, however if there’s one movie they do make it’s this one, over and over again. And that’s essentially the problem with Le Week-end. Hanif Kureishi’s script moves from one old idea to another with little insight and plenty of repetition – bicker, momentary peace, bicker, momentary peace. Although it seems to think it’s covering new ideas, everything from empty nest syndrome to the thin line between familiarity and contempt has been played out many times before, and often with much deeper understanding.

As the film progresses I could feel an inward groan with each new idea, which simply lump another cliché of top of the last – from the bitterness over an old infidelity to the fact the couple were once children of the 60s who’ve now gone to sees. Indeed, that last observation is perhaps most telling. In the 60s many suggested the free love generation thought they’d invented being young, and with Le Week-end it feels like they think they’ve invented growing older too, and have lost none of their solipsism on the way.

And to make it even more annoying, it’s achingly middle class and precious about that fact. However it’s the movie version of being middle class, where it feels like it’s about how people think others live their lives, rather than being about real people (and that’s despite the fact many of those behind the movie are just the sort of middle-aged, middle-class people the film is supposedly about). Nick and Meg are bubble people who couldn’t possibly exist outside the contrivance of the film they’re placed in, yet no one involved seems to have the self-awareness to realise that. The real middle-class is far more interesting than this.

All that said, the movie does have two excellent cards up its sleeve to try and paper over the fact it’s actually rather tedious and treading water intellectually – Jim Broadbent and Lindsay Duncan. The latter in particularly gives an almost Oscar calibre performance in a role that could easily have come across as a complete harridan in other hands (indeed, there are moments when the film comes painfully close to seeming like it simply doesn’t like women). The lead duo gives it their all and in themselves they’re often quite charming, ensuring that the movie is actually pretty watchable for the most part.

Well, kind of, as Duncan and Broadbent make most of the film’s individual sequences watchable. It’s just when you start piecing those sequences together you realise the film has nothing to say that hasn’t been said 100 times before, and it’s going to do it in a way that reflects how the makers think people live, rather than they really do.

Overall Verdict: With great performances from Jim Broadbent and Lindsay Duncan, Le Week- seems to think it’s got something interesting to say, but it doesn’t seem to realise many others have said it better before or that it’s about the idea of the middle-classes rather than actual middle-classes.