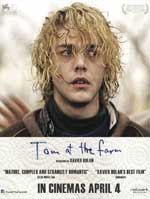 This is Xavier Dolan’s fourth film as a director, and he’s still only 25. It’s difficult to know whether to be impressed or whether to dislike him on principle. Indeed that’s true of much about Dolan – he has a supreme confidence that is simultaneously exciting and a little exasperating, his grasp of plot and theme is both engrossing and frustratingly underdeveloped, and he manages to imbue his films with a hipster vibe that is too pleased with itself and yet gives his films an unexpected vibrancy.

All that’s true of Tom At The Farm, even if it is a bit of a sidestep from his earlier movies into the world of the psychosexual thriller.

Dolan himself plays Tom, a young man who heads from the city into the middle of nowhere for the funeral of his boyfriend, Guillame. Arriving at Guillame’s mother Agathe’s (Lise Roy) farm, he discovers not only did his lover have a brother he’s never heard of, called Francis (Pierre-Yves Cardinal),but Agathe has no idea who he is. That night the explosive and controlling Francis makes it very clear that Tom will not reveal who he really is, and he’ll continue the fiction that Guillame had a girlfriend, Sara.

In his grief and also fearing Francis, Tom says nothing, hoping to get through the funeral and then leave. However with Francis not afraid to violently impose his will on others – which mainly revolves around him trying to keep his mother happy in his own slightly unhinged way – Tom finds it difficult to leave and is soon drawn into this family on the edge of insanity.

Many people have called Tom At The Farm Hitchcockian, which is mainly because Dolan borrows more than a few tricks from the master – ranging from Psycho-esque music to a Vertigo-infused playing with identity – even if the results are rather different.

It’s a constantly intriguing and thought provoking film, which creates a great sense of tension as it tells its ever darker story.  However it’s always difficult to escape the sense that the entire thing is pretty preposterous. Some have used the word ‘absurdist’ to describe Tom At The Farm, but that’s essentially an attempt by critics to get around the fact it’s often silly and sometimes doesn’t make any sense. As with Dolan’s earlier films, it often feels like it’s deliberately leaving things out in a rather self-satisfied way, but which is actually an attempt cover up the fact there’s a lack of logic both in the plot and the way the characters act. It leaves things to the audience so that it can pretend it isn’t at a loss as to how to handle things fully itself.

That’s particularly true at the end, when the films leaves it very late for a reveal that explains much of what we’ve been seeing. However it doesn’t actually illuminate many of the key questions, and while we’re presumably meant to be surprised, by this point it almost seems par for the course where Francis is concerned and therefore tells us far less than it initially seems to.

It’s not too much of a surprise to discover the film is actually based on a play – as many of the things here that seem a little excessive on screen might work better in the more intimate, enclosed world of the theatre.

All this would make Tom At The Farm an unmitigated failure but for the fact that while Dolan is sometimes a little more impressed with himself than he ought to be – and his screenplays could do with more control – he is undoubtedly a talent. He is someone where there are constant hints that he could become a true master, from his ability to pull the viewer in to how many of the individual scenes are absolutely excellent. Indeed Tom At The Farm is filled with some brilliant and utterly captivating sequences.

It’s just in pulling everything together that things hang on the edge between something extremely good and something that’s pretty daft. You certainly have  to admire how committed the film is – from the sense of unease it creates to the performances the actors gives – and it’s enough to ensure Tom At The Farm is worth watching, even if it’s not always that convincing.

Overall Verdict: In 10 year time I wouldn’t be surprised if Dolan is admired as one of the best directors around, but with Tom At The Farm he’s still ironing out the kinks, creating a film that has plenty to admire but also a lot that isn’t all that convincing.