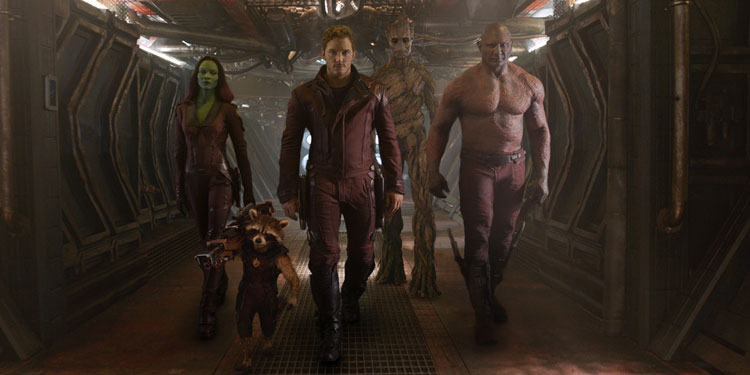 Over the last 10 years films based around the Marvel Comic Universe have dominated the box office raking in billions across the world. From Spiderman to the X-men series to the varying films that led up to The Avengers, cinemagoers can’t seem to get enough of superheroes.

So the latest addition to the never-ending stream of products is the highly anticipated Guardians Of The Galaxy which, we have been told, is like nothing we’ve seen before…but have we?

Guardians starts with an opening Indiana Jones would be all too familiar with, Peter Quill, aka Star Lord, raids and steals a coveted Orb – which could subsequently unleash powers strong enough to end civilisation as we know it. The remainder of the plot involves villains and bounty hunters trying to track down Quill and taking the orb for their own ends. On his journey Quill teams up with various misfits – Rocket (Bradley Cooper), a wise cracking genetically engineered racoon; Groot (Vin Diesel), a walking talking tree; Drax the Destroyer (Dave Bautista) and Gamora (Zoe Saldana), an orphan raised by the villain of the piece, Ronan.

This gang of misfits eventually put their differences aside and become ‘friends’, with The Guardians Of the Galaxy a title given to them in jest by Ronan. In summary the plot is very simplistic.

So will Marvel fans and cinema-goers flock to see this big budget sci-fi epic (estimated budget around $170M)? Can it offer them more than the all-too-familiar films I’ve already mentioned? Personally I’m a little bored of all these releases year upon year. From X-men to Iron Man, I feel I am seeing the same thing being regurgitated over and over, and feeling somewhat underwhelmed.

However, Guardians seems fresher and is very much tongue-in-cheek, with many references to the 1980s, including an awesome soundtrack that Tarantino would be proud of. After the initial introductions of the characters the film flows easily, with stunning action sequences and excellent comic timing. The galactic creature effects are incredible, even the spaceships we see seem refreshing new, Ronan’s spaceship is clearly a visual feast, as are the spaceships cloaking the attackers.

The cast all excel in their respective roles, Chris Pratt is perfect in the role of Quill, and this alongside The Lego Movie seems destined to propel him to A-Lister status. Even the supporting cast of Glenn Close, John C Reilly and Benecio Del Toro seem to enjoy their somewhat minor roles. The big surprise for me in this film was Karen Gillan (Nebula), I loathed her in Dr Who, however she has now become a fantastic villain for this franchise.

Overall Verdict: A very enjoyable romp in space, brilliant effects, great characters and fantastic one liners. Could this Motley Crew become a challenge to the mantle created in the Star Wars Universe?