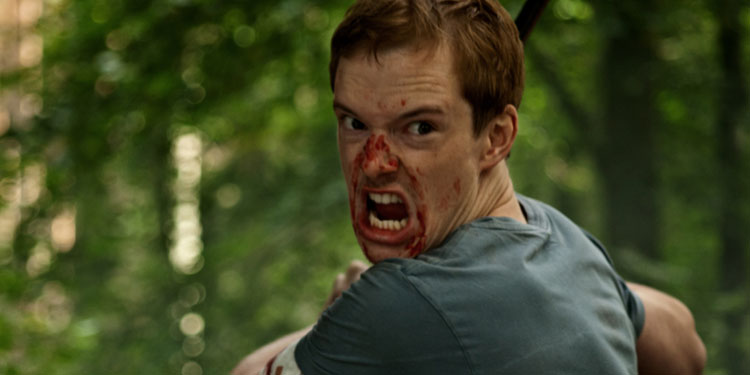 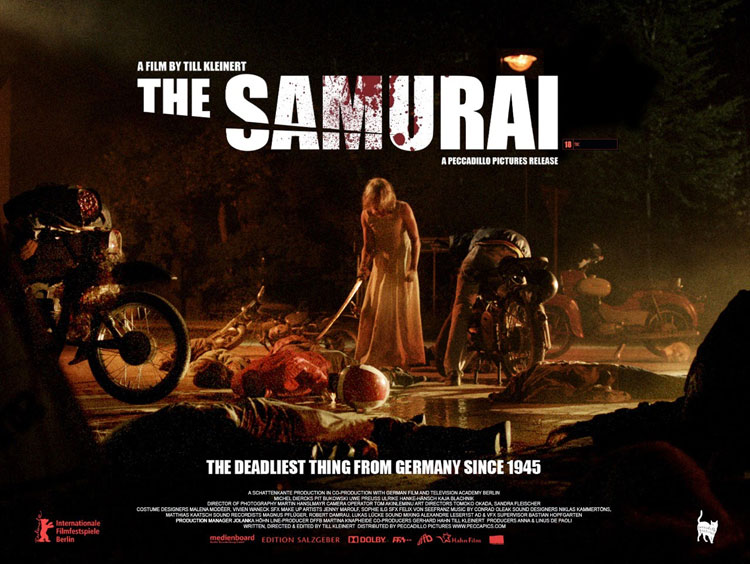 The Samurai comes from director Till Kleinert, a previous winner of the Iris Prize for his brilliant short film Cowboy, and with this film he stays in unnerving territory.

The title character in this film is a homicidal maniac wielding a katana and wearing a pretty white dress (played to mind-searingly chilling heights by Pit Bukowski). He’s slowly destroying the community and sanity of policeman Jakob (Michel Dierks), whose dogged attempts to capture and subdue him slowly become an obsession.

It’s dark. It’s scary. It’s intense in many different ways. It’s a great film. Anyone watching this movie will realise quite early on exactly why it sold out at the FrightFest Film Festival in London recently.

The game of Cat and mouse between Jakob and The Samurai, as the former attempts to halt the maiming and killing of the latter becomes almost a dance; they move together through pich-dark forests, lit only by the police-issue torch in, some incredibly atmospheric and nail-biting scenes.

Dierks plays the role of Jakob with accomplished ease, pulling off the demeanour of nonplussed-but-committed policeman, whose mental state slowly crumbles into a state of fear and obsession in an utterly convincing and enthralling way.  Bukowski is mesmerising in his role as The Samurai, with elements of The Dark Knight’s Joker, embracing chaos and animalistic instincts; and also the merciless sword-swinging of The Bride from Tarantino’s Kill Bill films.

However the titular character transcends a mere homage to either of these, being a fully-realised and chilling enntity in his own right, moving animalistically and silently, appearing here and there in the woods as the hapless Jakob attempts to track him. As the plot progresses, both the viewer and Jakob begin to question just how real The Samurai is and how much of this is some kind of nightmarish fairy tale.

If it were necessary to find something to criticise about this film, it would be that Jakob seems to be the only on-duty policeman in the whole of Germany, and insists upon following a madman into the dark unarmed. But since this is a horror film, such tropes are not only forgiven, but expected. Don’t expect these ticked boxes to betray a by-the-numbers horror movie: it’s not cheesy or easy to guess, and the simultaneous attraction and repulsion felt between the two characters pretty much drips off of the screen.

Not for a moment does the tension lift, and the fear of what may be hiding in the dark; not knowing whether to stay still or to move become quite real to the viewer, and is only emphasized by the otherworldy element Bukowski brings to his character; his smile alone could keep one up all night.