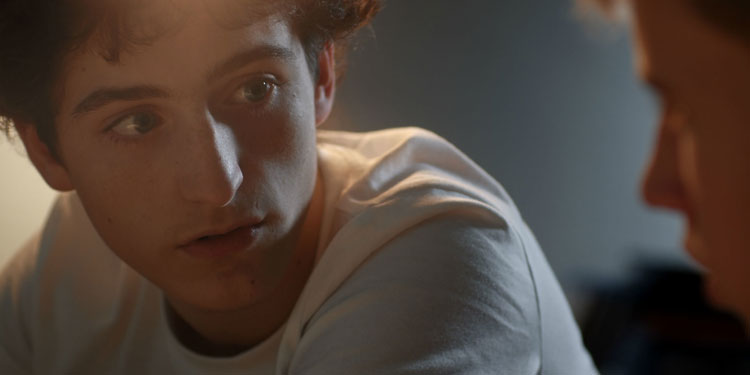 The View From Here – a collection of short films centring on coming out and the emotional minefields associated with such a life-changing action.

An Afternoon (En Apftermiddag)
Dir. Soren Green
A very sweet yet tense coming-out story involving two young friends. With communication restricted mostly to lingering looks, semi-articulate teenage grunts and text messages, this feels convincingly teenage, with the boys seemingly authentically struggling with feelings they’re not entirely confident about and have no idea how to express. A contemporary story told deftly and convincingly by everyone involved.

Morning Has Broken
Dir.  Simon Anderson
Frustratingly British but very well told, this is a  story of awkwardness, waistcoats, and the panic of a first kiss, all beautifully framed by breathtaking shots of the English countryside.

Camouflage
Dir Stephen Kampf & Andreas Kessler
Camouflage tells the story of two soldiers doing their best to blend in and not be noticed in more ways than one during a training exercise. Noteable for the non-verbal aspects of the pair’s communication telling their story easily and perhaps more honestly than a more overt script might.

Stokholm Daybreak (Gryning)
Dir. Elin Overgaard
The machismo of young adulthood is portrayed really well by two young actors, exploring the dynamic of two young men whose feelings towards one another begin to change. Shot against beautiful Stockholm cityscapes, this is a short that gently draws the viewer in and engages throughout.

Mirrors
Dir. Neil Ely
An adorable encounter between two ‘straight’ guys who’re high on MDMA in a gay club toilet cubicle. Very sweet and genuine, the actors give wonderful ‘high’ performances, never for a second seeming anything but truly intoxicated. Intercut with the goings-on in neighbouring cubicles, this is a touching and human story.

The Return (La Retour)
Dir. Yohann Kouam
A very tense story about a young man trying to reconcile adolescent masculinity, the approval of his friends and burgeoning understanding of sexuality, who then discovers an aspect of his brother’s life that he struggles to comprehend. Dripping with angst, frustration and anger, this is an evocative, interesting piece delivered in a pleasing urban style.

Tomorrow
Dir. Leandro Tadashi
Tomorrow is a little angsty, a little tense, however it comes across less endearingly than others in this collection, perhaps taking itself a little too seriously. There’s no one thing out of place – the actors perform well, the direction is more than competent and the soundtrack is perfectly pitched, but there’s something lacking overall that points this out as a promising start for the careers of these young filmmakers.