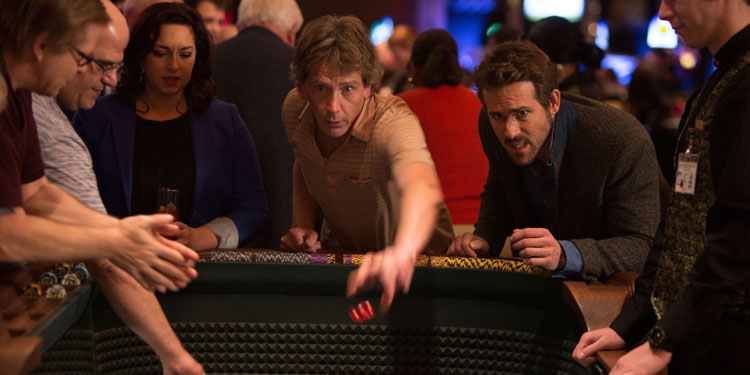 Gerry (Ben Mendelsohn) is an inveterate gambler who’s lost his wife and child, he’s massively in debt and has run out of time to pay it off. Then he meets Curtis (Ryan Reynolds), who also loves to bet, but still has life and verve – something Gerry is severely lacking. While he’s a drifter, he couches it in terms of being a free spirit who goes where life takes him.

Gerry ends up heading off on a road trip towards New Orleans with Curtis, hoping that his terrible run of luck will end. However, he simply can’t seem to catch a break, leading him in ever more desperate directions.

If you let it, Mississippi Grind is a surprisingly involving and effecting look at two men looking for something, even if they have no idea what that something is. Much of the drama comes from wondering whether Curtis infectious joie de vivre is just a smokescreen that’s leading Gerry in the wrong direction – essentially whether he’s made the wrong bet again, this time on a person.

There’s also the fact that on the periphery of everything you can’t help but wonder if this is a hustle. If Curtis really using this man who he knows is absolutely desperate, and if push comes to shove would Gerry screw over Curtis to get himself out of trouble.

It may not be the most eventful of movies, but it is a good one, which rewards the viewer’s patience.

Overall Verdict: Mississippi Grind is a movie worth taking a chance on. It’s a different kind of bromance than we typically get, but it’s a good one.