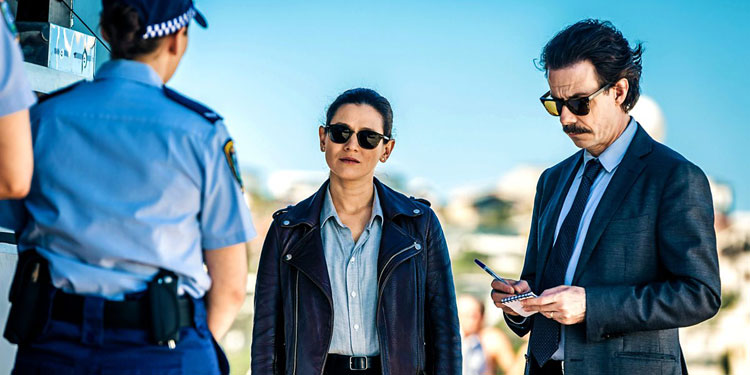 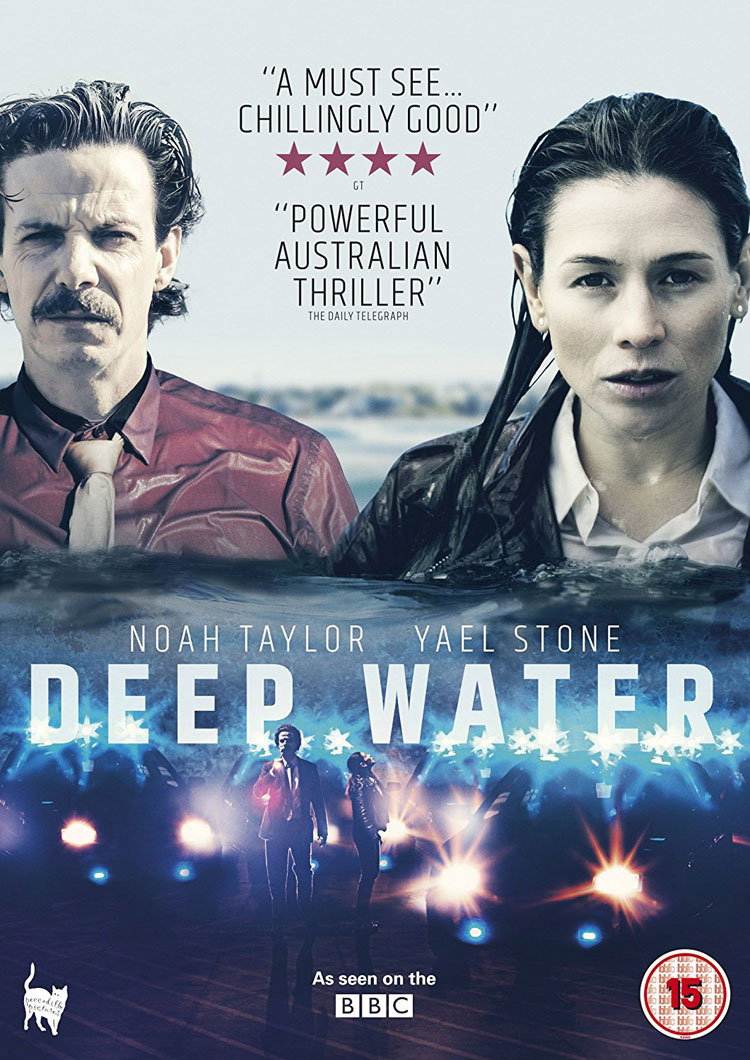 One thing that helps set it apart is that one of the most unpleasant parts of it – groups of teens beating gay men and/or forcing them off cliffs, is based on real life. Or at least it’s based on real life according to many gay people who lived in New South Wales in the 1980s and 1990s, but for a long time the police refused to consider that the deaths of more than 80 people might be part of a pattern. Thankfully though, just a few days ago they announced that they would finally look into the allegations that various gangs may have been hunting gay people for sport back then.

Deep Water takes those allegations and spins them into a plot that opens with the frenzied modern day murder of a gay man in the Sydney suburb of Bondi. Detective Tori Lustigman (Yael Stone) has just arrived back in Bondi after working in the country and is teamed with veteran Nick Manning (Noah Taylor). They realise that the man was either killed by someone he met through the hook-up app Thrustr, or he may have been murdered by his boyfriend, an Iranian immigrant terrified of being deported.

Initially it seems like a one-off killing, but Tori begins to wonder if there’s a serial killer at work, and also whether this murder is somehow linked to the deaths of other gay people in the 1980s. The powers-that-be in the police don’t want to hear about, but evidence begins to mount that a series of fatalities three decades before were more than muggings gone wrong and suicides, and could have been the result of the actions of a gang of teens led by the unpleasant ‘Hammers’ (Craig McLachlan). Those teens are now nearly 30 years older and still living under a code of silence about what really happened.

Tori and Nick need to find out whether events decades before really are linked to what’s happening now. Not only that, but Tori may be hiding her own connection to these crimes.

While Deep Water fictionalises the events of the late-80s and early-90s, none of what it describes goes beyond what has been claimed really happened. As a result, it’s a strong, melancholic backdrop to an often gripping drama, which does a good job of keeping you guessing, not just about who the modern day killer is, but who was involved in the events of the past, as well as various people’s connections to it.

Each of the 50-minute instalments sustains a dark tone from beginning to end, which is contrasted with the rich colours of the cinematography and the sun-drenched beaches of Bondi. Indeed, that mix of the crashing waves and natural beauty against the grimmest aspects of humanity is a constant theme in the show.

Click here to watch the trailer for Deep Water

Oftentimes with thrillers, both on TV and on film, they only delve into gay themes for prurient reasons, highlighting the ‘abnormal’ extremes of LGBT sexuality in ways that almost blame the victims for anything that happens to them (or just as likely, it’ll be them that’s the killer). However, while Deep Water is well aware of the potential dangers of things such as hook-up apps, it doesn’t use it to moralise about promiscuity or to hint that the victims had it coming.

In fact, it’s quite the opposite. The gay community is the victim here, assaulted on all sides from police that don’t want to listen, groups of people that hate them, and a serial killer on the loose. Yet they’re determined to continue living their lives, with the series highlighting the strength of the love and compassion between some of the men, compared to the brutish nastiness of some of the other characters, who don’t even treat gay people like human beings. Yet even there, it doesn’t completely turn the ‘bad guys’ into cartoon characters, hinting at some of the reasons people ended up doing what they did.

Things do go a bit far at the end, when in search of a fitting conclusion it slides from the grounded reality of what’s gone before into nutty psycho territory. It takes things just that little bit too far, although thankfully it doesn’t completely go off the deep end and the strength of what has led up to it makes it more than forgivable. Indeed, it’s interesting that while the show has to tell us who the killer is, by the end the show is more interested in the past, with an immense anger and sadness about the attitudes and official nonchalance that let so many gay people die without the police caring or even paying attention.

Overall Verdict: Deep Water certainly isn’t a jolly series, but it’s an entertaining and intriguing one that keeps you guessing about what’s been happening in Bondi’s gay scene in both the past and the present.