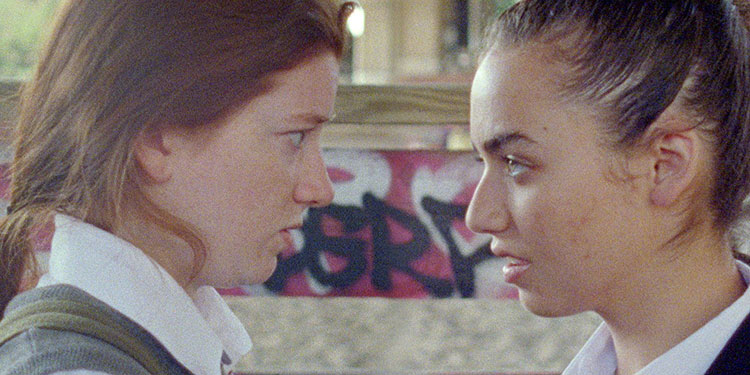 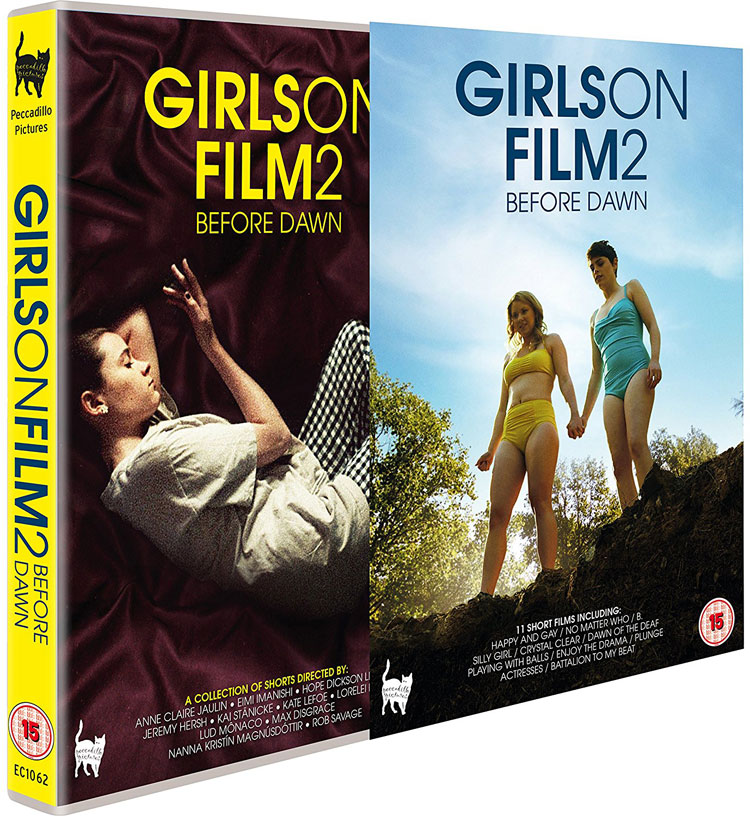 Although there’s been a bit of a delay between releases, Girls On Film is back with Before Dawn, which features 11 short films from around the world. It’s an eclectic and interesting selection, so take a look at what we thought below.

Happy and Gay Dir. Lorelei Pepi (USA) 10 mins
A fun animated short, made in the style of a 1930s black and white cartoon. Two animal-like women invite two men out dancing. All is fine until the taxi driver realises this isn’t the sort of double date he thought, as they’re planning to spend the evening in a gay club. Things go further downhill when the club gets raided and the gay couples end up in a very strict church.

Happy and Gay is silly but very well done, perfectly capturing the feel of a 30s Merry Melodies-style cartoon. However, it gives things a smart, revisionist take, showing that life for some wasn’t that merry, as they were faced with homophobia, police raids and having to live in fear. It also subtly points out that while racism was perfectly acceptable to show back then, homosexuality wasn’t. A fun and entertaining slice of musical whimsy, which shows that sometimes things don’t change as much as we might think, even while they change a lot in other ways.
4 out of 5

No Matter Who Dir. Anne Claire Jaulin (France) 18 mins
It’s summer and a group of teen girls are out camping with their scout troop. It’s a world of fun, but also one of rules, including the moralistic principles of the organisation. It’s also a world that encourages intimacy between the girls – but intimacy that has its limits, especially when it comes to the ‘rules’ the girls impose upon themselves. After one of the girls kisses another in the woods, but gets spotted, the repercussions grow as the instigator of the kiss tries to deflect attention.

Well-made and sometimes quite dark, No Matter Who explores the difficulties of growing up, internalised homophobia, as well as the sort of dynamics and power-plays within groups that can easily become destructive and potentially dangerous. There’s a slightly Lord Of The Flies feel at times, and unfortunately many will know how easy it can be when you’re young to try to hide your own issues with your sexuality by projecting it onto others with an edge of cruelty.
3.5 out of 5

B. Dir. Kai Stänicke (Germany) 15 mins
Review originally posted following Iris Prize Festival screening
B. is a stop-motion effort that took two and a half years to complete, with Barbie-like dolls as its characters. It follows a woman whose interest in a red-headed woman is literally pushed aside by a man who thrusts himself into the boyfriend position. They head into a courtship that hits all the socially expected markers but seems to bring neither of them any happiness. Through it, the woman continues to think about the flame-haired girl she didn’t end up with.

Using the main character’s fantasies and dreams to play out various possibilities and feelings about the situation they’ve ended up in, B. brings up a variety of ideas, before jumping into live-action for the final couple of minutes. Well-made and with a strong mix of humour, horror and longing, perhaps the most interesting thing about B. is how it engages not just with people – both male and female – hiding or ignoring their sexuality, but also the pressures that attempt to push people, particularly women, in socially traditional directions, presented to them as if there are no other options. It also unsurprisingly suggests that those pressures won’t end in happiness.
4 out of 5

Silly Girl Dir. Hope Dickson Leach (UK) 5 mins
Co-written by Game of Thrones and The Levelling’s Ellie Kendrick, this short follows a trans man who, following a disappointment, meets himself as a teenager (when he was still living as a woman), at a time in his younger life when he was feeling many of the same frustrations, of being misunderstood and rejected both because of his gender and sexuality. However, then a girl arrives who sees something in the teen, even if she doesn’t yet see him as a man.

It’s a short about a potentially transformative moment in a young teen’s life, and a reminder that sometimes getting hooked up on words can hide a deeper truth underneath. There’s an odd sweetness and honesty to the film, as the grown character is given an opportunity to pass on wisdom about what’s really important and that sometimes it’s about how you look at things.
3.5 out of 5

Click here to watch the Girls On Film 2: Before Dawn trailer

Dawn of the Deaf Dir. Rob Savage (UK) 12 mins
The opening of Dawn of the Deaf explore the trials faced by a group of deaf people, who face mockery, difficulties in communication and the potential dangers of being exploited (either sexually or emotionally). However, things are completely upended when a strange sound causes everyone who hears it to die, leaving only the deaf behind. However, then the dead start coming back as zombies.

A bit Day Of The Triffids and a bit Night of the Living Dead, Dawn of the Deaf is an entertaining short, although it does suffer from feeling more like a calling card for the makers than a fully cohesive short in its own right. Even the lesbian angle – which comes from the fact two of the deaf people are a female couple going through difficulties – feels oddly tokenistic, especially as the film doesn’t really go anywhere. It’s well made, but doesn’t add up to as much as it seems to think it does.
2.5 out of 5

Playing with Balls Dir. Nanna Kristín Magnúsdóttir (Iceland) 8 mins
A man and a woman are playing tennis, but things are getting increasingly fraught. A group of older lesbians begin to take notice. One of the older women decides to take action, leading to a sexual connection with the woman who was playing tennis. However, searching to capture something may mean we miss what we already have.

What at first seems like a simple little story quickly becomes more complex, as it questions both what’s going on, and what the characters feel about it. Have the characters mistaken the situation, and is their desire to reach out really about their own feelings. It’s a short film of ideas, about trying to recapture your youth and looking for connection beyond the expectations of normal life, but realising that perhaps not everything is that simple.
4 out of 5

Enjoy the Drama Dir. Lud Mônaco (Canada/Brazil) 6 mins
A young woman steps into the house she once lived in with another woman. She looks back on the relationship, with her narration exploring a connection that was loving, but also difficult and tempestuous. While feeling trapped in the now empty home, she reminisces about how the advice to ‘enjoy the drama’ brought intensity and excitement, but also pain and a barrier that may have ensured the relationship was doomed.

Enjoy The Drama is certainly very French, and perhaps a bit too pleased with itself. While the visuals successfully capture the highs and lows, distance and intimacy of the relationship between two women, the voiceover is sometimes a bit heavy-handed. By the time it reveals more of the ‘drama’ that unfolded, some will be rolling their eyes. Visually though, it’s extremely good.
3 out of 5

Plunge Dir. Kate Lefoe (Australia) 6 mins
Two Aussie women head off on a trip to a lake in a lush part of the outback. What was supposed to be a romantic and relaxing day takes an unexpected turn when both women jump off a ledge into the water, but only one of them lands.

There will be some who won’t know quite what to make of Plunge, while others will find it redolent of the memories of the past or fantasies of a possible future. It’s a relatively simple film, but it’s one that takes a somewhat rare trip into people’s heads and the vibrant things happening there, which can sometimes clash with the mundanity and disappointment of reality.
4 out of 5

Actresses Dir. Jeremy Hersh (USA) 12 mins
After watching a play, nervous aspiring actress Sara decides she has to meet one of the women from the performance, who she’s a huge fan of. The older actress invites her to head off and get drunk with her. At first it seems the actress is in control of a relationship where a younger woman seems to be looking for a mentor. However, as the younger woman’s insecurities (or perhaps just her constant need for affirmation) surface, it starts to feel that actually it’s a relationship that’s really just about one of them.

Starring Rebecca Henderson, who some will remember from Appropriate Behaviour, Actresses is an interesting and well-thought out short. It takes a look at age differences – most particularly the narcissism of youth – the power differential between people, and the difficulty of negotiating the point in a relationship where lust and excitement has to become something deeper. Well-acted, sweet and sometimes quite sharp when it needs to be, it’s a short that’s well worth a look.
3.5 out of 5

Battalion to My Beat Dir. Eimi Imanishi (Algeria) 14 mins
Young Mariam doesn’t want to conform to gender roles. While the boys in her Algerian refugee are still allowed to play, she’s now supposed to be a woman and not bring ‘shame’ on her family. After he brother is called up to the army, Mariam decides to run away, feeling that she can be a modern-day Joan Of Arc, helping to free her homeland.

Although some of the meaning of the film is a little hard to decipher – especially without knowing the politics of the battle these people are engaged in – it’s still an intriguing short, contrasting how a violent struggle for freedom can still mean oppression along gender lines that doesn’t have much room for dissent. It’s about battles of various fronts – between tradition and change, patriarchy and equality, society and personal autonomy. While it doesn’t have time to explore all these in depths, by taking us into a little seen world it does a good job of opening up the ideas it wants to look at.
3.5 out of 5

Overall Verdict: While some of the shorts are stronger than other, there are enough highlights and thought-provoking films to ensure this second dip into lesbian Girls On Film is a worthwhile release.