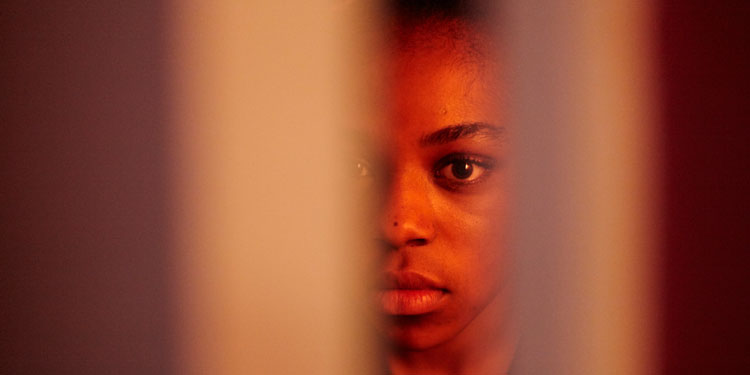 For the last few years Big Gay Picture Show has tried to cover the wonderful Iris Prize Festival in Cardiff as it happened, with reviews being posted while the fest was still happening. However, this year I had the honour of being part of the International Jury, so as a result we decided to wait until the festival was over before we posted our reviews of the 35 shorts that were in contention for the £30,000 prize.

So what did I think? Take a look below at my thoughts on the first 11 short films (presented in screening order – opinions are mine and do not necessarily reflect the thoughts of the overall jury).

We Love Moses
Director: Dionne Edwards
Winner Of Best British Short
A young Londoner, Ella, reminisces about when she was 12 and started to have feelings for her brother’s friend, Moses. However, her discovery of a secret ends up changing everything, from her brother’s friendship with Moses to Ella’s social status at school.

Smartly made and with a brilliant central performance from young actress Danaë Jean Marie, We Love Moses manages to take a look at a young woman’s burgeoning sexuality while also making subtle points about internalised homophobia and how much things can change without a single word being said. It’s a film that sticks in the mind.
4 out of 5

Die Ballade Von Ella Plumhoff
Director: Barbara Kronenberg
If 13-year-old Ella Plumhoff doesn’t pass a maths exam, she will be held back a year in school. To help her study over the summer, Ella’s mother hires a younger tutor, Ulrika. Their forced pairing develops towards an unexpected friendship and perhaps something deeper. However, Ella’s romantic desire for her long-haired baller tutor threatens to ruin everything.

At the core of Ella Plumhoff is a sweet story of teen discovery and confusion, however that sometimes gets obscured by unnecessary quirky touches that quickly become more frustrating than whimsically charming. Almost perversely the whimsy results in the depiction of emerging female sexuality being more problematic that it ought to have been.
2.5 out of 5

Pool (Piscina)
Director: Leandro Goddinho
Claudia’s journey to discover more about her grandmother’s past leads her to the elderly Marlene, who has turned an empty swimming pool into what amounts to a time capsule of memories. This story of an old Marlene is intercut with the story of what happened between Marlene and Claudia’s Holocaust survivor grandmother decades before.

For some Pool people was the standout of the festival, delving into important issues (not least what happened to lesbians under the Nazi regime) with a well told story shot through with striking visuals. It does undoubtedly do that, but the metaphorical/literal swimming pool of memories is an image that for many, myself included, tended to overwhelm the great work done elsewhere. It’s the image around which the short is based, but it may have actually been a stronger film without it, due to its potential for undercutting the power of the realism on display in the rest of the movie.
3.5 out of 5

The Mess He Made
Director: Matthew Puccini
Iris Prize Special Commendation
Jude has gone to a clinic for a rapid HIV test. During the 15-minute wait for the results he wanders out to the supermarket, takes some calls and gets a parking ticket. Although on the surface that’s all that happens, The Mess He Made is beautifully constructed to allow the audience to piece together where Jude has found himself, and that this is a man trying to pull his life back together.

It does this without holding the audience’s hand, instead allow the viewer the space to consider the possibilities of what they’re seeing and what’s going on, while very subtly hinting towards the conflicts that arise out of the pressure for a more heteronormative version of gay culture.
4 out of 5

The News Today
Director: Lisa Donato
Made by a group of talented filmmakers shortly after the Pulse gay nightclub shootings in Orlando, The News Today follows gay couple Jason and Jonathan on a seemingly ordinary evening. However, unexpected violence changes everything.

The News Today is an interesting film, which engages with both modern gay relationships and the fear that at any moment, people’s worlds can be changed and turned upside-down. However, being made just a few weeks after the Pulse tragedy, it perhaps needed a little more space and time to fully express the issues it’s trying to deal with. It’s a good film, but not quite as fully formed as it might have been.
3.5 out of 5

The Colour Of His Hair
Director: Sam Ashby
The Colour Of His Hair is based around a never-before-filmed script written in 1964, when gay sex was still illegal in the UK. It sees two male lovers trying to work out what to do when they’re threatened with blackmail. That fictional narrative is mixed with a documentary look at The Lesbian and Gay Newsmedia Archive, based at Bishopsgate Institute in the City of London. Both sides of the film are interesting but they never coalesce. The old script and the story around it are interesting, while The Lesbian and Gay Newsmedia Archive is calling out for a full documentary look at this invaluable resource, which stores over 200,000 clippings and objects detailing modern gay history in the UK. However, mixing the two here feels forced, and the juxtaposition is less interesting than the makers must have hoped.
2.5 our of 5

If I Met A Magician (Im Efgosh Kosem)
Director: Shaked Goren
Omri is released from his Israeli military reserve duty so that he can observe the country’s Memorial Day. He wanders around Tel Aviv, visits a gay bar and a museum, waiting for the siren that signals when everyone should fall silent. I suspect an Israeli audience would react differently to this film than others, purely because it assumes that the viewer will understand the customs and ideas it’s talking about. However, Israel’s Memorial Day is very specific to the country and very strictly observed (at least officially), as well as being tied into the Independence Day celebrations that come the day after. Without that knowledge – and perhaps even firsthand experience of Israeli culture – the film comes across as oddly random and quickly becomes meandering and tedious.
2 out of 5

Hattie Goes Cruising
Director: Konstantin Bock
In this documentary Hank Major, also known as Hattie Louise, is a 70-year-old African-American man from Philadelphia, who recounts stories from his life, much of which is based around his experiences cruising for sex, and that many different men he’s slept with over the years (a surprising amount of whom he has naked pictures of). The film allows Hank to talk about how the world has changed – such as the cruising grounds that have come and gone – while acknowledging that despite decades passing, cruising culture is still alive and well, even if the way he engages with it as a 70-year-old is different to when he met his partner back in the 1980s.

Hattie Goes Cruising is a bit of an audience divider, with many wondering what the point of it is, while others are fascinated by the issues of race, gender, sex, changing gay culture and social class that it touches on, all through the prism of one man’s ideas and experiences. With echoes of cinema verite and Shirley Clarke’s classic Portrait Of Jason, it’s an intriguing if sometimes slightly frustrating film.
3.5 out of 5

Little Potato
Director: Wes Jurley & Mathan M. Miller
Another documentary, Little Potato is based around interviews with (co-director) Wes Hurley and his mother, recounting the difficulties of their life in Russia around the time of the collapse of the USSR. That resulted in Wes’ mom ending up as a mail order bride in America. However, Wes’ stepdad was a strict Christian which caused issues when Wes realised he was gay. The new dad had a secret of his own, though.

Little Potato (which is Wes’ nickname), is a real audience charmer – except perhaps for those sceptical of anything that uncritically presents the US as the great hope of the world. The story is interesting and Wes’ mother is a wonderful interviewee. A little more distance between the subject and the filmmakers might have helped to dig deeper in the tale, but even so it’s a real charmer of a short.
4 out of 5

Half A Life
Director: Tamara Shogalou
The real thoughts and stories of a young, Egyptian gay activist are brought to life through vivid and striking animation. We hear via anonymous voiceover how a traumatic encounter with the police – with ingrained homophobia, corruption and genuine brutality – led to his awakening as an activist. However, he is doing so at a time when the Arab Spring has caused many changes in Egypt, many of which have been dangerous for gay people (even though homosexuality isn’t actually illegal in the country).

Half A Life’s animation is both its greatest asset and its greatest weakness, vividly illustrating and illuminating the story we’re being anonymously told in voiceover, while occasionally having a tendency to overpower the often intense and inspiring voiceover. However, it certainly gives an effective insight into a hidden world.
4 out of 5

Picture This
Director: Jari Osborne
This documentary takes a look at Andrew Gurza as he attempts to organise the follow-up to a successful sex positive party for disabled people, which caught the media’s attention as a ‘handicapped orgy’. Gurza, who has cerebral palsy and uses a wheelchair, has gained a reputation for confronting issues of disability, sexuality and sexual expression, with Picture This looking at both the organising of the party, as well as Andrew’s position as a self-described ‘queer cripple’. It shines a light on something few have probably thought about, not least the complex ways many disabled people have to negotiate access to sex and their sexuality.

It is a fascinating subject and Gurza himself is a brilliant subject, largely because he manages to be completely frank and smart about the issues that are important to him, while also being pretty funny about it, which helps the audience get past any uncertainty they may have about the subject matter. It’s a good documentary, but one which feels it should find its home on TV rather than at a film festival.
3.5 out of 5