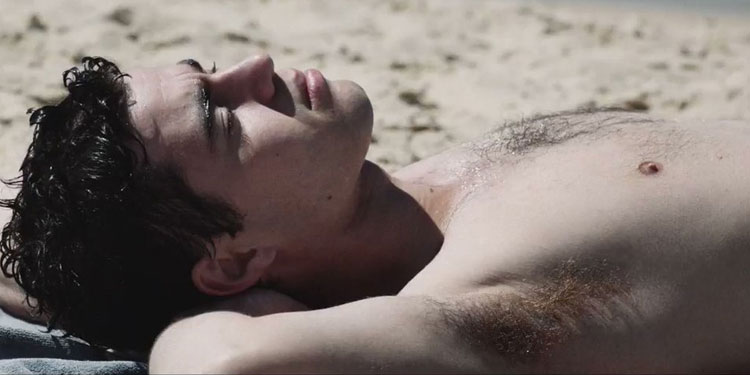 And if you want to check out our reviews of earlier Boys On Film releases, click here.

Alex And The Handyman
Dir. Nicholas Colia (USA) 14 mins
Perhaps not too surprisingly, most filmmakers have shied away from exploring pre-adolescent sexuality, especially if it’s gay sexuality. However, Alex And The Handyman takes a look at it in an initially rather sweet way, following precocious nine-year-old Alex, who develops an instant crush on much older handyman, Jared. The child wants the moody 20-something man’s attention, but Jared isn’t that interested in humouring the fantasies of a kid. Alex And The Handyman starts off as a sweet and sometimes funny look at pre-sexual awakening. However, some will feel it goes too far towards the end in a slightly creepy way. Indeed, while it’s presumably not meant like that, it almost becomes a NAMBLA fantasy of what kids want and their complicity in it. A little more thought wouldn’t have gone amiss.
2 out of 5

Mr Sugar Daddy
Dir. Dawid Ullgren (Sweden) 13 mins
Hans in in his 50s and looking for something new in life. After seeing another middle-aged man with a much younger lover, Hans sees an opportunity for himself when he meets the handsome, young Andrej. But while Hans is smitten with his new potential lover, it becomes increasingly difficult to tell whether Andrej really likes Hans, or just likes the money the older man can spend on him. Relationships with noticeably large age differences seem to more prevalent in gay than straight culture, which inevitably leads to questions about why that might be. Eschewing cod psychological explanations about daddy issues, Mr Sugar Daddy is more interested in power dynamics and the potential for both sides to play with the others’ emotions, while not knowing quite that’s what they’re doing. It’s intriguingly put together and nicely even-handed. It carefully shows that Hans isn’t a fool for pursuing Andrej, while not demonising the young man either. An interesting watch.
3.5 out of 5

Spoilers
Dir. Brendon McDonall (UK, Australia) 22 mins
Each year the winner of the Iris Prize LGBT International Short Film Festival gets the funds and support to make a new short. Spoilers is one of those films, made by Aussie Iris Prize winner Brendon McDonall. It’s the sort of sweet, quirky, slightly schmaltzy, nostalgic and film-literate short we don’t get enough of in the gay movie world. The film follows Leon, a self-professed ‘short, fat bloke from Derby’, who unexpectedly bumps into the handsome Felix. Leon finds it almost impossible to believe Felix would actually be interested in him, while Felix has his own reservations about whether he can truly love someone. Although the fantastical moments – from talking sat-navs to chatty lobsters – verge towards going over the top, they allow us into the internal thoughts of the characters. That’s vital as it’s essentially a film about the things that will stop us finding happiness, and where we can inadvertently become our own worst enemy. It’s sweet, often smart and rather charming.
4 out of 5

Tellin’ Dad
Dir. André D Chambers (UK) 15 mins
After a rather sexy opening of two naked men writhing in bed, Tellin’ Dad has a lot to live up to. Those writhing guys are Dan and his boyfriend, who’ve been together for over a year. However, Dan is still in the closet, but promises to write a letter to his family, telling them he’s gay. The film then follows the reactions of the different family members, leading up to the person he’s most worried about, his dad (played by The Royle Family’s Ricky Tomlinson). For the gay movie connoisseur, this coming out tale is likely to feel a little old hat, although it still covers important topics and what helps make it feel more worthwhile is that unlike most similar films, it’s looking at working class people and the pressures that come from there, some of which are universal and some of which are specific to that place and culture. Ultimately hopeful, there are moments when it’s slightly overwrought but it’s also quite sweet and realises what a pivotal moment telling your family can be for a gay man.
3.5 out of 5

Boys
Dir. Eyal Resh (USA) 14 mins
It’s the beginning of summer and adolescents Brian and Jake are having a sleepover. It’s certainly not the first time they’ve shared a room for the night, but on the cusp of adolescent they’re dealing with new and unfamiliar feelings when checking how many armpit hairs they’ve grown develops into something potentially more sexual. Boys attempts to capture the confusion of burgeoning sexuality – whether gay or straight – with the young men unsure of what they’re doing, what it might mean or how to communicate about it. There’s little resolution but it’s an intriguing look into a time when many young men have experimented or questioned their sexuality and then been surprised by what has happened.
4 out of 5

Hole
Dir. Martin Edralin (Canada) 15 mins
The sexuality of disabled people is still one of the more taboo subjects, with many too squeamish to even approach it (or indeed to admit that disabled want to, and do, have sex). Hole follows Billy, who has cerebral palsy, which limits his mobility and means he needs an assistant for things such as washing. He also yearns for sex and true intimacy, but comes up against a world that only seems to offer him that if they can’t see him – such as if he can suck a guy off through a gloryhole. Boldly told and with a strong central performance from Ken Harrower as Billy, Hole illuminates some of the issues around disability and sex – from physical accessibility to sex to the faux intimacy of assistant and assistee – without feeling maudlin or patronising. The end is challenging and initially seems somewhat extreme, but it’s thematically interesting and not actually too far off the mark of what some disabled people have had to ask for help with.
4.5 out of 5

Happy And Gay
Dir. Lorelei Pepi (USA) 10 mins
A neat little short which is both very familiar and unlike anything you’ve ever seen. It’s an animated musical, done in the style of a 1930s black and white cartoon. Two girls phone up two guys in order to go out on the town together. However, this isn’t a boy-girl double date, as they’re headed to an underground gay club, which ends up being raided by the police. Happy And Gay looks exactly likes a 1930s cartoon, which makes the juxtaposition of the fact it’s about gay people – a group that was forced to be hidden on screen at the time – even more fascinating. It deals with prejudices that were certainly around 90 years ago, but which sadly still exist now, and does it through a very interesting prism. It’s witty, fun and surprisingly thought-provoking.
4 out of 5

Pedro
Dir. André Santos and Marco Leão (Portugal) 24 mins
After staying up all night and only getting home at dawn, Pedro wants to sleep but is dragged to the beach by his mother. He doesn’t want to be there until he spots a handsome (and initially naked) stranger. Although there’s plenty to keep the viewer interested in Pedro, it’s also a film with pacing issues, which sometimes feels like it’s dragging out moments that don’t add much, while rushing through moments that do. Although that’s a little frustrating, it certainly still has plenty to offer, whether it’s the exploration of Pedro’s somewhat rootless existence, the barriers, intimacy & similarities between mother and son, or the fact that at times it’s pretty damn sexy. Indeed, for sheer hotness (and bulge grabbing), Pedro wins out in this collection. For many that will be more than enough to make it worth watching, although thankfully, and despite a few issues, it offers more than that.
3.5 out of 5

Kiss Me Softly
Dir. Anthony Schatteman (Belgium) 16 mins
17-year-old Jasper has had to get used to the fact his father is rather self-involved and likes to be the centre of attention, even if that leaves him bored and on the sidelines. He’s also being bullied by some of the other kids at his school. Then, when his friend kisses him, Jasper decides it’s time to start taking charge of his existence, which he hopes will encourage his father to make some changes too. A well-made and nicely told short film, Kiss Me Softly has enough going on that it would be interesting to see it expanded out into a feature-length movie. In fact that’s the only complaint, as while it sets up an interesting situation and characters, it doesn’t really have the time to play out the issues it raises. The ending of the film is almost what should be the beginning, which is fascinating and frustrating in equal measure.
3.5 out of 5

Overall Verdict: Another good Boys On Film release, which features an eclectic mix of gay short films, ranging from the smart to the sexy.

Special Features: Director’s Introduction for Spoilers,   The Making of Kiss Me Softly,   Trailers for Alex and the Handyman, Hole and Happy & Gay
OVERALL RATING: