It may have Captain America in the name, but Civil War is almost as much of an Avengers movie as Age Of Ultron. Only Thor and Hulk are missing – but they will both be in Thor: Ragnarok, so they haven’t been forgotten completely.

Take a look at the trailer and posters below.

END_OF_DOCUMENT_TOKEN_TO_BE_REPLACED

Emily Blunt has recently been talking about her role in the adaptation of the hit book Girl On A Train, saying that while the action may be relocating from London to New York, she will still play the character as English. Now she may also have some co-stars (alongside the previously cast Rebecca Ferguson and Haley Bennett), as Variety reports that Chris Evans and Jared Leto are being eyed for the movie.

Paula Hawkin’s book made history when it spent 20 consecutive weeks at the top of the hardback bestseller charts, and ‘follows a woman (Blunt) devastated by her recent divorce who spends her commute fantasizing about a seemingly perfect couple who live in a house that her train passes every day. Along the way, she becomes entangled in a mystery revolving around the married couple.’

Assuming they sign on Evans will be Ferguson’s husband, while Leto will be the hubby of Bennett.

Out director Tate Taylor (The Help) is set to helm the movie from Cressida Wilson’s script. It’s believed shooting will start later this year.

Chris Evans may be very busy on the Captain America: Civil War set at the moment, but he’s also figuring out what he’s going to do in between Marvel movies, as Deadline reports that he’s attached to star in Gifted, for director Marc Webb (The Amazing Spider-man).

Gifted, ‘focuses onAll Pages a man who sues for custody of his gifted niece’, and will start filming this autumn. The man is Frank, a deliberate underachiever who is looking after his niece even though he doesn’t officially have custody. However, when the girl’s grandmother threatens to destroy the normal life he wants for the child, he sets out to become her official guardian.

Webb intends to follow that with The Only Living Boy In New York, which Miles Teller is set to star in. The Deadline reports mentions a couple of other actors are also in talks, with Rosamund Pike and Jeff Bridges circling the project.

In that film, ‘Teller is attached to play a recent college grad who learns that his overbearing father is having an affair. The son tries to stop it, only to become involved with the woman as well. With advice from a questionable quirky neighbor, the young man learns about love.’

It is an odd thing but when actors are playing superheroes they often don’t have vast amounts of success outside that franchise. It’s true of Chris Evans, who’s massively popular as Captain America, but his other films haven’t made much of an impact on the box office (his recent Playing It Cool didn’t even get a UK cinema release).

It’s a shame as he certainly has charm on screen.

Before We Go may not be likely to make mountains of cash, but it does look like it may be a rather charming romance with Evans starring alongside Alice Eve. And it will also act as a showcase for Evans directorial skills, as it’s his debut behind the camera.

Chris plays a man who helps out after Eve’s purse is stolen, which ‘sparks a life-changing, nighttime sojourn through New York City.’

Before We Go will be on VOD in the US from July 21st and in cinemas September 4th. No UK date is currently set. END_OF_DOCUMENT_TOKEN_TO_BE_REPLACED

Who thought Chris Evans and his brother Scott (who is, incidentally, gay) could get more adorable? Well, they can, as well as showing off new talents at the same time.

After all, who knew Chris could play the piano, or that they could sing, and harmonise too. Now we just need to find a musical to put them in – plus Chris can play guitar too, so they can do all the music!

Scott posted a pic of the brother having a go at James Taylor’s Fire and Rain, although we don’t get the whole thing. Scott lets the world know why, with the caption, “Chris and I messing around over Memorial Day weekend. Unfortunately we had the giggles and couldn’t make it through the whole thing without laughing for here is just a tease… With some sung apologies to each other. :)”

Take a look below. END_OF_DOCUMENT_TOKEN_TO_BE_REPLACED 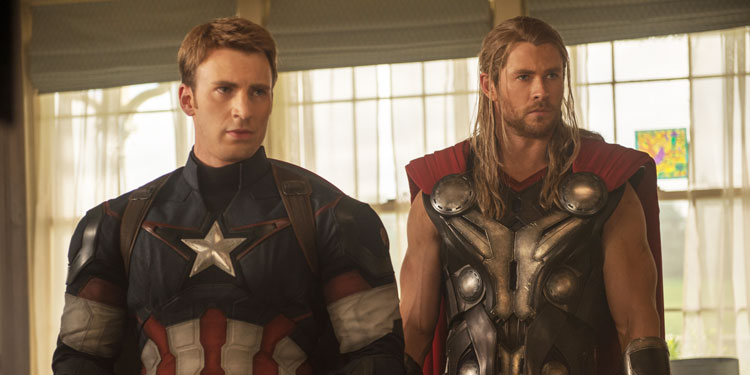 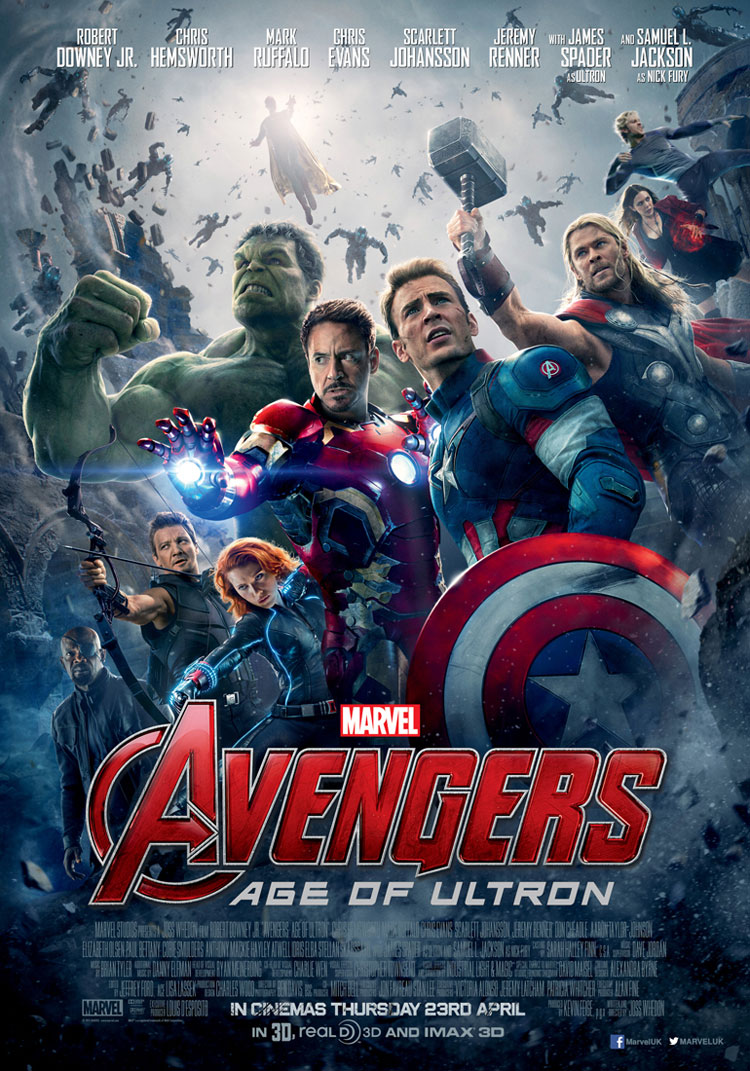 The plot is a cut and paste job about the evil Ultron, who is fed up with humans ruining their planet, and reasons it’s best to wipe them out – after all they’ve had a fair go. It’s actually a pretty good argument, but we’re supposed to be on the side of the Avengers, who must protect Earth from the evil robot and his army of automatons. END_OF_DOCUMENT_TOKEN_TO_BE_REPLACED

The stars of Marvel were out in force for the LA World Premiere of Avengers: Age Of Ultron, and as you’d expect the likes of Chris Evans, Robert Downey Jr., Chris Hemsworth and Jeremy Renner had their best threads on as they strutted down Hollywood Boulevard, and we’ve got the pics to prove it.

It was a bit of an early World Premiere as the film isn’t out in the US until May 1st, but the stars are off on a world tour to promote the film before its international release on April 23rd, and so the US premiere has already taken place.

As well as the stars mentioned above, Avengers actors such as Mark Ruffalo, James Spader, Scarlett Johansson, Aaron Taylor-Johnson, Elizabeth Olsen, Cobie Smulders, Samuel L. Jackson, Paul Bettany and Anthony Mackie were also on hand, as were stars from the wider Marvel world, such as Agents Of S.H.I.E.L.D’s Clark Gregg and Brett Dalton, and Ant-Man’s Paul Rudd.

Take a look at the action from the red carpet below. END_OF_DOCUMENT_TOKEN_TO_BE_REPLACED

Chris Evans plays a screenwriter who has little interest in the romantic comedy script he’s been commissioned to write, largely because he’s not a big believer in love. With every relationship he’s had, he’s ended up telling the woman he doesn’t feel the same way she does, and he’s now essentially trying to avoid the whole thing. But then he meets Michelle Monaghan, and there’s definitely a connection. END_OF_DOCUMENT_TOKEN_TO_BE_REPLACED

Believe it or not but it’s now less than two months until Avengers: Age Of Ultron on April 23rd 2015 (and a week later in the US). As a result it’s time for the official poster which brings together an awsul lot of heroes, including Hawkeye, Black Widow, Hulk, Iron Man, Captain America, Thor and newcomers Scarlet Witch and Quicksilver.

It looks cool if a little and rather generic, especially with Vision and loads of robots flying around in the background.

Here’s the short synopsis: ‘When Tony Stark jumpstarts a dormant peacekeeping program, things go awry and Earth’s Mightiest Heroes, including Iron Man, Captain America, Thor, The Incredible Hulk, Black Widow and Hawkeye, are put to the ultimate test as they battle to save the planet from destruction at the hands of the villainous Ultron.’

It’s always busy in the world of Marvel, and with Avengers 2 and Ant Man wrapped and now in post-production, they’re already hard at work on putting the pieces together for Captain America: Civil War. Now another has slotted into place with the company revealing they’ve added Daniel Bruhl (Rush, Inglourious Basterds).

There’s no news on exactly who he’ll play, although most sources suggest he’s take on a villainous role in the movie – even with that, there’s disagreement over whether he’ll be the main villain or not.

Some have also linked to announcement to the related rumour that the Doctor Strange villain will be introduced in Civil War, and that this is the role Bruhl has signed on to play. At the moment this seems like the most likely scenario.

Anthony and Joe Russo return to direct, with a May 6th, 2016 release set.