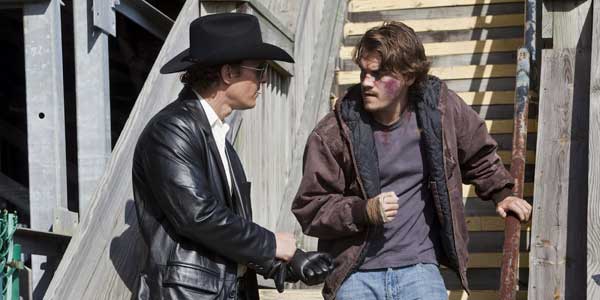 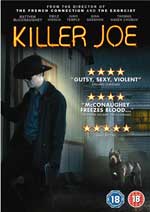 Chris (Emile Hirsch) is in need of cash and so embroils his brother, Ansel (Thomas Haden Church), in a plot to kill their heartless mother. They’re going to hire a lawman called Joe (Matthew McConaughey) who moonlights as a hired killer. It’s going to cost $25,000, but Chris has heard his mum has a $50,000 life insurance policy that will pay out to his sister, Dottie (Juno Temple). Joe wants to be paid upfront, but agrees he’ll have Dottie as a kind of retainer. However nobody has thought things out very well and things soon spiral out of control, especially when they realise just what a mean character Joe is. END_OF_DOCUMENT_TOKEN_TO_BE_REPLACED

Twice Born is set to debut at the Toronto Film Festival, but before then a trailer has arrrived, which doesn’t exactly tell us much about the plot, but does give us a film for the movie’s imagery. Penelope Cruz plays single mother Gemma who returns with her teen son to present-day Sarajevo where her son’s father (Emile Hirsch) died during the Bosnian conflict of the 1990s. The movie is directed by Sergio Castellitto based on a novel by Margaret Mazzantini.

Emile Hirsch is one of those actors who’s attempted to straddle the line between indie and mainstream, so that he has enough Hollywood clout to allow him to pick and choose more interesting small projects. However his mass-market movies, such as Speed Racer and The Darkest Hour, haven’t turned out too well, so he could do with a bit of a career bump.

Now he’s in early talks to star in another proper Hollywood movie, as director Peter Berg wants him for Lone Survivor, according to Variety. He’d join a cast that already includes Mark Wahlberg, Ben Foster, and Taylor Kitsch.

The project is based on the memoir of Navy SEAL Marcus Littrell, which tells his journey of survival when he and his SEAL team members were ambushed by the Taliban in Afghanistan. The soldiers were pinned down in the Hindu Kush mountains while on a mission to eliminate a terrorist. Mark Wahlberg is playing Littrell, with Ben Foster, Taylor Kitsch, and Emile Hirsch playing other SEAL team members.

Peter Ber is directing from his own adapted screenplay. It isn’t certain when the movie may shoot.

It’s tough to keep a secret in Hollywood, but it seems director David Gordon Green has managed it, as the helmer of Pineapple Express and Your Highness has managed to film a movie called Prince Avalanche, which he shot last month in Texas.

If the film had a no name cast, it might be understandable the film went under the radar, but this one stars Paul Rudd and Emile Hirsch. It’s a remake of the 2011 Icelandic road trip comedy Either Way, which is set in the 1980s and follows two highway maintenance men who work in some of the country’s remotest areas. Their friendship has developed over the years they’ve shared time on the road, with much of the movie being their discussions about anything and everything, from their sex lives to their fears.

Although the Variety report about the film isn’t clear whether the new version differs from the original in any major ways, the presumption is that Rudd and Hirsch play two similar men, who chat as the travel the wilds of Texas. There’s no news on when it might hit cinemas.

Who’d have thought trying to kill your mum would cause suc trouble? When 22-year-old Chris (Emile Hirsch) finds himself in debt to a drug lord, he hires a hit man to dispatch his mother, whose $50,000 life insurance policy benefits his sister Dottie (Juno Temple). Chris finds Joe Cooper (Matthew McConaughey), a creepy, crazy Dallas cop who moonlights as a contract killer. When Chris can’t pay Joe upfront, Joe sets his sight on Dottie as collateral for the job. The contract killer and his hostage develop an unusual bond. Like from a modern-day, twisted fairy tale, “Killer Joe” Cooper becomes the prince to Dottie’s Cinderella. Based on the play by Pulitzer and Tony Award winner Tracy Letts, “Killer Joe” is a garish, proactive black comedy from Academy Award-winning director William Friedkin (The Exorcist, The French Connection) and stars Emile Hirsch, Matthew McConaughey, Juno Temple, Thomas Hayden Church, and Gina Gershon. The film’s out June 29th.

While I’d always known Emile Hirsch was a good looking guy, it was only when I saw the image above that I thought, ‘Yep, I’ll have me one of them!’ The 26-year-old is looking all kinds of hot as a slightly dirty, battle-weary survivor of an alien apocalypse in The Darkest Hour.

I’ve gathered together a few more pics of the Speed Racer and Into The Wild actor below, both in Darkest Hour and other movies where he’s been looking extra good. Click on them to enlarge and enjoy! END_OF_DOCUMENT_TOKEN_TO_BE_REPLACED

Only a few years ago, the idea of Hollywood making a movie almost completely peopled by gay characters would have been virtually unthinkable. However it seems Brokeback Mountain might have opened a few doors, as not long after that film came out both Gus Van Sant and Bryan Singer announced they’d be making movies based on the life of Harvey Milk, who in 1977 became the first openly gay man to be elected to political office in California. However Van Sant’s film was the first out of the gate, while Singer’s has now fallen by the wayside. That’s probably not a bad thing, as it’s difficult to imagine Singer’s take on the subject being better than Milk. END_OF_DOCUMENT_TOKEN_TO_BE_REPLACED